Arisa Bunnings (アリサ・バニングス Arisa Baningusu) is one of Nanoha Takamachi's best friends at Seishou Elementary School, along with Suzuka Tsukimura. Daughter of two successful company owners, she plans to succeed them after graduation.

Arisa is based on the character of Arisa Lowell from Triangle Heart 3.

Arisa is an outspoken, dog-loving Anglophone and multimillionaire heiress. She gets angry at Nanoha halfway through the series for keeping secrets from her friends. Despite this, she cares deeply for her friend. She is a strong-willed person the apparent leader in her small circle of friends. When she has bursts of rage at not fully understanding what's going on, Suzuka is usually there to calm her down. Arisa is proficient with English and loves dogs, owning about ten at her large mansion. Similarly to Nanoha and Yuuno's first encounter, Arisa found an injuried Arf and took her to be treated in her house under the assumption that the familiar was just a big dog. Nanoha and Yuuno eventually met with Arf at Arisa's home.

In A's, Arisa's role is greatly reduced. Though she takes the lead of helping the new foreign student, Fate Testarossa, in her integration of Japanese lifestyle, her few on-screen appearances are mostly of her worrying about the fact that Nanoha and Fate are keeping secrets from her and Suzuka. Upon meeting with Arf in her puppy form, Arisa noted that she seemed strangely familiar to her. Arisa and Suzuka are trapped in a magical barrier and bear witness to Nanoha and Fate's battle with Hayate Yagami possessed by the Will of the Book of Darkness. Later, Arisa, along with the other civilian characters, are let in on the secrets of what Nanoha has been doing all this time.

In A's epilogue, Arisa still goes to school with Nanoha and Suzuka and remains their close friend.

Although she does not show up in the show itself, it is known that during the StrikerS time frame Arisa is living an ordinary, if somewhat busy, life as a college student.[1]

Arisa appears in The MOVIE 1st, The MOVIE 2nd A's, Reflection and Detonation.

Arisa Bunnings is an elementary school student of Private Kaisei Elementary School. She is a Midchilda-style duelist of T&H Elements team and her primary avatar is Fencer type, which is good at mid-to-close range tricky maneuvers, with reddish orange (unnamed) color theme, specializing in fire. Her Brave Duel Device is Flame Eyes and her "magic color" is orange. 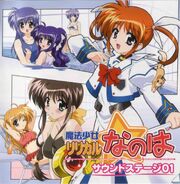 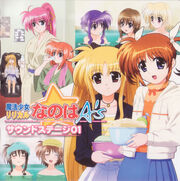 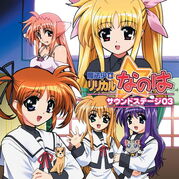 Retrieved from "https://nanoha.fandom.com/wiki/Arisa_Bunnings?oldid=34221"
Community content is available under CC-BY-SA unless otherwise noted.