Arnage is around 1,60 m tall and in her teens. Her Hückebein mark is on her left waist, covered slightly by her pants.

Arnage first appears in the end of chapter 4, contacting Veyron via videophone as he returns from his fight against Thoma Avenir. She then appears with Stella in the next chapter in the Hückebein base, welcoming Veyron back. She seems to have a bright personality and a truly epic appetite, much to Veyron's disapproval. Nevertheless, he has hijacked a whole truck of food for her on his way back just as she asked. She then informs him that Fortis and Deville would like to speak with him, and he leaves.

In chapter 7, she lands on Ruwella to assist Cypha, who has gone searching for Thoma. While Cypha is fighting Signum, Arnage restrains Thoma, Isis, and Lily with a rope-like tool, then put them to sleep with what appears to be soporific gas (as she covers her mouth and nose with a handkerchief when using it). When asked, Arnage tells Cypha that she has brought means to transport their captives to their base. Although Cypha is unsure about bringing Isis and Lily along, Arnage tells her that Thoma will cause less trouble if they are taken with him, since he might like them, and Cypha agrees.

After Thoma being to suicide, Stella let her going to save him, while she was scared about it because it is too high to jump off, Stella also tell DeVille for going with her. When Thoma casting the Silver Stars "Hundred million" againts everyone who came close to him, Arnage was going to reacted and destroy all the blast, but Isis going to attack her, Arnage was going to battle with Isis and Thoma at the same time. When Isis telling Arnage to go away, DeVille was come to saving Arnage with using Short Jump. After Curren stabbed Hayate, she tell every Hückebein member for going back to the Esquad.

Later, after Veyron has awake and locked by Curren due he has be infected body reject by Hades Vandein, she and Sonica Lilian was going to bring back Veyron's heart to him, while Sonica said will giving discount the cost of using her ability due of the situation like this. When Arnage arrival in a small mountain and waiting Thoma and Lily go through the bridge, Sonica respond to her that she have a bad luck today and maybe will have a bad things happened to her, she state to Sonica that don't scared her too much.

Arnage's EC Divider is coded 718. Her EC Reactor is built inside the Divider (i.e. React through blood authentication). She is also the only one of the Hückebein member who have a two reacted form. 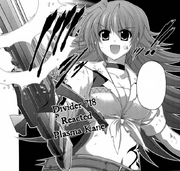 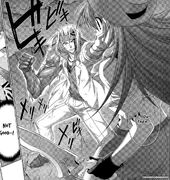 Retrieved from "https://nanoha.fandom.com/wiki/Arnage_of_H%C3%BCckebein?oldid=33959"
Community content is available under CC-BY-SA unless otherwise noted.