It is named after the symbol of the Greek demigod of medicine, see Rod of Asclepius.

As revealed in StrikerS concept art and ViVid flashback, Asclepius originally belonged to Megane Alpine and after her "death" in the Combat Cyborg Incident, was given to her daughter by Jail Scaglietti.

Asclepius' ordinary form is a pair of purple and black gloves that look like Kerykeion, but full-finger with purple gems instead of half-finger with pink ones. This seems to be both its standby and active form, since Lutecia wears it in day-to-day life in StrikerS. Even in the setup scene in ViVid, it appears as a pair of gloves alongside other Devices in their standby forms.

"Limit Release" is available in StrikerS, but that is likely an output limiter used to hide Lutecia from the Bureau, rather than a separate form or function of Asclepius.

Asclepius was primarily used by Megane to cast supportive spells in the past. Before it was given to Lutecia, Quattro optimized it for summoning magic.[2]

In StrikerS, when Lutecia goes berserk under the manipulation by Quattro during the battle against Erio Mondial and Caro, Asclepius is also seen being overloaded and damaged. 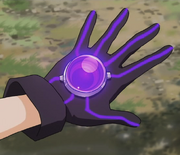