Bardiche (バルディッシュ Barudisshu) is an Intelligent Device created for Fate Testarossa by Rynith. He receives a number of upgrades in the series.

He refers to Fate as "sir" despite her gender, signifying that he may be as old-fashioned as his namesake.

Historically, a bardiche is a type of polearm that was used in medieval and renaissance Europe, especially in Eastern Europe and Russia.

In the movie continuity, he is further renamed from Bardiche Assault to Bardiche Hornet (バルディッシュ・ホーネット Barudisshu Hōnetto) after the upgrade in Reflection. It is presumably named after the program cartridge "Hornisse" (Ger. "Hornet") loaded by himself in the final battle in The Gears of Destiny.

Bardiche is also titled the "Battleaxe of Flash" (閃光の戦斧 Senkō no Senpu),[1] which is originated from Rynith's description when she is creating Bardiche in Nanoha Sound Stage 02.

After being badly damaged in the first fight with Signum's Laevatein in A's, he is upgraded into Bardiche Assault by Mariel Atenza with a revolver-type Belkan cartridge system due to his keen request.

By the time of Force, he is further upgraded to an experimental "5th Generation Device", which could turn mana into physical energy to confront anti-magic effects.

In the movie continuity, no significant change is noted in The MOVIE 1st and The MOVIE 2nd A's except for the minor changes in designs. In Reflection, Bardiche Assault is further upgraded by Mariel into Bardiche Hornet, with only two active forms due to urgency.

Bardiche's Zanber Form is almost identical to the "Zankantou" (Colossal Blade in the Atlus translation) wielded by Sanger Zonvolt's Thrudgelmir in Super Robot Wars. As a result, fans sometimes jokingly claim that Sanger is Fate's father. In the present SRW continuity Sanger never piloted the Thrudgelmir, and it is instead piloted by a cyborg clone of him with identity issues, similar to how Fate is an enhanced clone of Alicia Testarossa (this version of the Thrudgelmir was introduced after the airing of A's).

Notably, Bardiche is one of two Devices in the series (the other being Graf Eisen) that have been subjected to Recovery on screen. 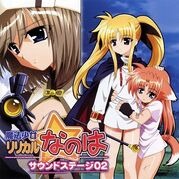 Retrieved from "https://nanoha.fandom.com/wiki/Bardiche?oldid=32870"
Community content is available under CC-BY-SA unless otherwise noted.