Barrier Jacket ( Baria Jaketto, lit. Protective Clothing) is an extremely versatile and ubiquitous field-type defensive spell that summons a magical armor protecting a mage from external harm.[1][2] Unlike other protective spells, it is usually auto-cast by the mage's Device upon its activation and only dispelled when it is critically damaged, destroyed, or deactivated by its master. The defensive capacities of Barrier Jackets are very high and allow mages to survive in life-threatening conditions, however, they cannot be completely relied upon for protection.

A Barrier Jacket is summoned when the mage activates their Device (mages who don't have a Device summon it manually) and is accompanied by a bright flash of light. Whatever normal clothes the mage is wearing at the time disappear until the Barrier Jacket is dismissed. It has been shown on at least one occasion that it is possible to activate a Device without summoning the Barrier Jacket, however, any situation requiring the former is also most likely to warrant the latter, anyway.

Nanoha Takamachi has demonstrated that forcibly dispelling a Barrier Jacket can be used as a last-bid defense against a single attack, which then leaves the mage completely unprotected (see Reacter Purge).

Barrier Jackets are highly customizable. In addition to outward appearance, mages can tweak the spell's specs and parameters to better suit their preferred combat styles. Some mages design further Jacket forms or modes in addition to their default ones, so they can switch between them to quickly adapt to the battle at hand. Throughout the series, following alternative modes have been identified:

Some examples of Barrier Jacket or Knight Armor designs: 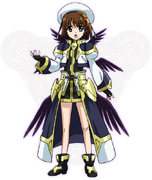 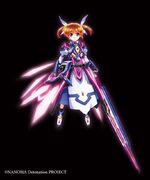 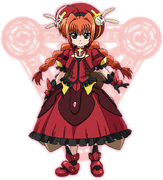 Retrieved from "https://nanoha.fandom.com/wiki/Barrier_Jacket?oldid=33498"
Community content is available under CC-BY-SA unless otherwise noted.