Caro Ru Lushe (キャロ・ル・ルシエ Kyaro Ru Rushie) is a character in Magical Girl Lyrical Nanoha StrikerS. Fate T. Harlaown became her guardian after Caro had been banished from her tribe due to possessing too much power. Wherever she goes, Caro is usually accompanied by her pet dragon, Friedrich (or Fried, for short). She is a kind and somewhat timid girl and, just like her partner Erio Mondial, has little sense for matters of life that most people would see as ordinary.

Caro is presumably named for either the FSO Caro or the Mazda Carol. However, her name is misspelled as "Caro Ru Lusie" in StrikerS opening theme one.

In her first appearance, Caro wears a hooded outfit similar to that traditionally worn by the White Mage class in the Final Fantasy series. Her theme color is pink.

Caro is based on (and shares a voice actress with) Kusuha Mizuha of Super Robot Wars, who pilots the dragon-themed mech RyuKoOh.

A running gag throughout the series post-StrikerS is that Caro hardly gets any taller; in contrast to Erio, who's been having a growth spurt during this time.

Native of the 6th world Alzus, Caro was born within a nomad-like "minority tribe" known as Ru-Lushe.[2] Since very little, she was taught the tribe's traditional summoning arts: the "Dragon Summon". Caro exhibited a rare talent to the craft, to the point that she could already summon two powerful dragons by the age of six. This frightened the elders of her tribe however, who believed that her power would attract misfortune, and lead them to banish the girl.[3] Because a summoner is not only required to conjure a dragon but also to control it, and Caro lacked this skill, even she herself was afraid of her own power, fearing that her summons would go on a rampage.[4] According to Fate, it would be years before she was finally able to free herself of this fear.[4]

Sent to stay at a TSAB's HQ-attached special protection facility on Midchilda, Caro had a life of many restrictions and few liberties imposed upon her.[3] Although a powerful magic user, no Bureau unit wanted to employ her because she couldn't control her power yet.[4] This would have gone on forever, had she not met with Fate one day by pure chance.[5] After hearing about Caro's past, Fate decided to take her in and become the girl's guardian. In the beginning, circumstances prevented Fate and Caro from living together. Instead, the girl started to live and work as a Conservation Officer Assistant (保護官アシスタント) at a wildlife preservation camp in the 61st world Supools, where she discovered that her talent as a summoner also helped her to deal with all sorts of animals. Caro remained there until she was invited to be part of the Riot Force 6.

Although talented, Caro still has much to mature as a mage. At the beginning of StrikerS, she is a C+ ranked, ground-based summoner that had little to no control over the dragons that she invoked. Caro eventually overcame this flaw after her ingression in the RF6 and much training, becoming a part of the Forward Lightning under the sign-name of "Lightning 04" and a reliable member of the forward team. It is slightly implied that she harbors romantic feelings towards Erio.

At the end of the series, Caro goes back to the Supools camp of the Frontier Nature Conservation Corps and continue to work as a Conservation Officer along with Erio.

Unlike Erio, Caro has hardly grown a 1.5 cm in the time of ViVid, much to her chagrin and to Lutecia's amusement, who jokingly refers to her as "midget". Caro also appears to have a slight complex about her height, since her partner, Erio, and Lutecia, are significantly taller than her. Like Erio, she now sports a long ponytail. The two of them still work together on Supools but take a few days off when Fate informs them that she plans to go on trip with Vivio. They are next seen on Carnaaji, where they meet up with the rest of the group, delighting Fate.

In chapter 10, she, Erio, Fate, Nanoha, Subaru, and Teana participate in a spectacular mock battle. In the team battle on the second training day, Caro takes the Full Back position of the Red Team, opposing Lutecia. Caro summons Einhard back when she is injured by Nanoha, and soon gets attacked by Lutecia and Rio. Caro uses Alchemic Chain to distract them long enough for Corona's golem to launch its Rocket Punch to defeat them. Immediately afterward, Nanoha takes her by surprise and defeats her. After the other two matches of the day, Caro spends some family time with Erio and Fate.

Caro first appears in chapter 5 of Force, when she and Erio are assigned back under Hayate's command in the Special Duty Section 6, established specifically to deal with the current Eclipse crisis.

Caro has more appearance after Thoma's team joins the Section, playing the role of their senior. From chapter 21, together with other members, she is responsible for safeguarding of the transportation of AEC Armaments to the Section's base, and is involved in the battle against the Grendel family.

Being a practitioner of the Midchildan magic system, Caro's main talent is her ability to use summoning magic. Specifically, she is skillful at summoning and controlling dragons (hence the name Dragon Summoner). Furthermore, she is quite proficient at Increase-type Support spells, namely Boost Up and Enchant. Combining this ability with her blatant handicap for direct combat (she is highly dependent of her summoned dragons in order to attack proficiently, even after receiving Nanoha's training) into consideration, Caro is assigned as the Full Back of the Forward Team in StrikerS, and is given a Boost Device named Kerykeion.

In Force, Caro's additional AEC Armament consists of four S2 Shields, which she merely referred to as "Defensive Equipment".

Caro's Barrier Jacket, named Lightning Style, is based on Fate's Impulse Form, offering higher mobility and lower mana consumption at the cost of defense. It possesses a white cape that is similar to Fate's, as well as a white hat (which is left off after Caro begins sporting a ponytail). 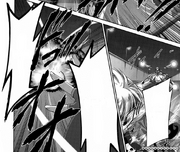 Retrieved from "https://nanoha.fandom.com/wiki/Caro_Ru_Lushe?oldid=33169"
Community content is available under CC-BY-SA unless otherwise noted.