Chantez Apinion[2] (シャンテ・アピニオン Shante Apinion), colloquially referred as Sister Chantez, is a character first introduced in Magical Girl Lyrical Nanoha ViVid. She is a sister and a Church Knight of the Saint Church, being an apprentice of Schach Nouera and a fellow of Sein.

Chantez is presumably a reference to Mazda Chantez. However, her first name has also been transliterated as "Chante" in ViVid Strike![3] and INNOCENT cards. Her family name is likely a modified from or a misspelling of "Arpinion", a French family name.

Similar to Sein, Chantez has a somewhat mischievous streak, and is still learning church etiquette.

Like Vivio Takamachi and the others, Chantez is participating in the 0079 DSAA Intermiddle for the first time. She is first seen in chapter 17, submitting the registration of Inter-Middle with Sein's help, before it is agreed by Schach. She knows Vivio, calling her "Her Majesty". When Vivio arrives at the church to visit Ixpellia in chapter 18, they engage each other in a mock battle to pass time. Chantez ends up defeating Vivio (who agrees not to counterattack but only to defend herself) by launching full-powered Twin Wheel Sword Dance, which Vivio knows will be difficult to defend against before its execution. It is then revealed in her conversation with Deed that she cares a lot about Vivio but wants to make her aware of the dangers of confronting weapon users, since she knows that Vivio's body and affinity are poorly suited for grappling.

She faces off against Viktoria Dahlgrun in chapter 31 but is defeated after putting up a good fight.

Chantez makes a minor appearance in ViVid Strike! In episode 5, she visits Nakajima Gym to befriend Fuka Reventon and act as one of her sparring partners under Mikaya Chevelle's arrangement. In episode 6, she watches the 0080 Winter Cup tournament together with Sein and Ixpellia.

Although Chantez is a Church Knight (which generally specialises in cross-combat), she practices the Midchildan magic system and wields a "Midchildan Armed Device" named Phantasma, a pair of tonfa-shaped twin swords similar to Schach's Windenschaft. Her fight style is Twin-Sword Arts (双剣術 Sōken Jūtsu), and her special skill is her "dreadful speed", which is a good combination with (or may be a precursor of) her doppelgänger spell Ensemble. 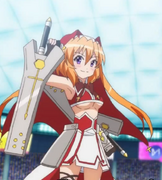 Retrieved from "https://nanoha.fandom.com/wiki/Chantez_Apinion?oldid=33892"
Community content is available under CC-BY-SA unless otherwise noted.