He first encounters Nanoha Takamachi, Fate Testarossa and Yuuno Scrya during the Jewel Seed Incident in 0065. Over the following decade, Chrono rises to the rank of Admiral himself, commands several spaceships, marries his old co-worker Amy Limietta, and has two children with her.

Chrono first appears as an antagonist and rival to Nanoha in Lyrical Toy Box, hence his "evil" black attire with shoulder spikes.

The death of his father in 0054 affected his personality, leaving him a very stiff and taciturn person, although he eventually grows out of it.

Chrono takes his position as a Bureau officer very seriously, which often puts him in awkward moments with his mother (who happens to be his commanding officer on the Arthra), and with Amy Limietta, both of whom are more light-hearted in nature. He is highly disciplined in the art of magic, and his experience and training will often make up for his relative lack of magical power in combat. Because of this, he generally frowns at using more power than necessary to stop an opponent. Nevertheless, he is impressed with both Fate and Nanoha's magical prowess. He does have a rather dry sense of humor, however, as he often comments (in deadpan or harsh sarcasm) on Yūno's ferret guise.

He first appears in the series to halt a fierce battle between Nanoha and Fate, saying that the use of magical force was hazardous. Throughout the rest of the series he takes a sort of back seat to Nanoha in the Lost Logia investigation except in command decisions, where he is second only to Lindy Harlaown. After the incident, he helps Fate with her trial, and later helps hone her combat skills at the Time-Space Administration Bureau.

Chrono has a more in-depth role in A's, because of his father, Clyde Harlaown. Clyde was an Admiral of the Administrative Bureau Sailing Force, who died during an earlier investigation of the Book of Darkness. A's Sound Stage 02 reveals that after Clyde's death, his old friend Gil Graham had his familiars, the Liese twins, train Chrono since the age of five.

In the course of the series, however, Chrono discovers that Aria and Lotte Liese, his former mentors, and their master Gil Graham, were assisting the Wolkenritter behind the scenes. They believed that the best way to defeat the Book of Darkness was to allow it to become completed, and sealing both the Book and its master in a prison universe indefinitely. He places them under arrest, because such a plan was clearly illegal, the Book of Darkness would most likely find its way out, and if the Book remained in existence, someone out there would want to abuse it.

Later in the battle, he was instrumental in planning and executing the destruction of the Book of Darkness' Defensive Program.

Six years after the events of A's, 20-year-old Chrono is an Admiral, in command of the Arthra after his mother retired the post. He is somewhat more relaxed as the ship's commanding officer than he was as a bureau officer, and is engaged to Amy Limietta.[3] Possible rivalries notwithstanding, he is on friendly terms with Yūno.

Chrono is now married to Amy, and they have twins, a boy named Karel and a girl named Liera. They appear to be happy together, but Chrono remarks in a CD drama that he had little choice but to marry her, suggesting that either the marriage was arranged by Lindy or that he had gotten Amy pregnant.

Making his first StrikerS appearance in episode 11, Chrono is now the Captain of the XV class warship Claudia and a TSAB Admiral. He is mentioned as one of only two people with the authority to lift the Capacity Limiter placed on Hayate (the other being Carim Gracia). He is also revealed to be a good friend of Verossa Acous of the TSAB Internal Affairs Division, one of the few Ancient Belka magic system practitioners in existence and Carim's brother.

Towards the end of the season, he is the one who leads the spaceship fleet in the final assault on The Saint's Cradle.

Here, he is Nanoha's rival, who hails from the Dream World. In order to save his world, he steals memories from humans on Earth, which Lindy sees as a crime. Lindy grants Nanoha magical powers to stop Chrono, but much like how Nanoha did with Fate in the primary continuity, this Lyrical Nanoha befriended Chrono and enters a relationship with him in an epilogue much like the one at the end of A's. A common misconception is that he is not related to Lindy in Lyrical Toy Box, however, their relationship as mother and son is revealed at the end of the scenario.

Chrono appears in The MOVIE 1st, The MOVIE 2nd A's, Reflection and Detonation.

During the events in Reflection (summer of 0067), Chrono is assigned as the Branch Manager (支部長 Shibuchō) of the Bureau's temporary branch office on Earth.

Chrono appears in both Battle of Aces and Gears of Destiny.

Chrono Harlaown is a middle school student and the son of Lindy Harlaown.

Chrono's battle style as a mage is "Standalone Generic" type (独立汎用型 dokuritsu hanyō gata).[2] As he uses only Storage Devices in the series, there is no complex aria required for him to set up S2U or Durandal.

Chrono is one of the very few major characters in Nanoha with relatively weak natural aptitude for mana (along with Teana Lanster and Vice Granscenic). Nonetheless, Chrono is a very capable combat mage, well-rounded in all aspects of magic. His astounding speed and control with Shooting-type spells, in addition to his ability to attack multiple targets at once, allow him to easily outclass both Yuuno and Nanoha in the first season. He also shows an aptitude for using Binds in combat, as well as temperature manipulation magic.

Thanks to his experience and training, Chrono displays acute tactical acumen and can be surprisingly stealthy, getting the drop on Fate with his Delayed Bind, on Vita with his Stinger Blade Execution Shift, and on the Liese twins with a Struggle Bind.

Chrono's weaknesses seem to include an inability to cast spells that require extreme mana outputs (although in the Portable continuity, he uses Full Drive spells extensively and effectively). He also finds Field-type spells and Barriers to be a "tricky" area of magic[citation needed], and is very weak in hand-to-hand combat, preferring long-ranged fights instead[citation needed].

Chrono's Barrier Jacket is always active when he is on duty. 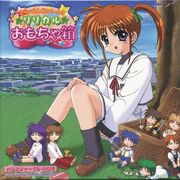