Divider-996 (ディバイダー996 Dibaidā 996) is Thoma Avenir's EC Divider in Force. In its first time of use, it refers itself to as EC Divider Code-996. When it is reacted with Thoma and Lily-Strosek (being the Reactor), it is referred as Divider-996 Strosek Reacted "Black Knight".

Force (ch.17), revealed the Vandein Corporation made hundreds of copies of the original, but they were destroyed by Arnage. However, Force (ch.21) further revealed at least one copy survived and is now owned by Hades Vandein, though he claimed it to be imperfect.

Divider-966 appears primarily in Force. "996" and "React STROSEK" are engraved on its body.

The Device's form bears similarity to a Gunblade from Final Fantasy fame. 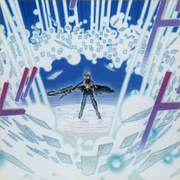 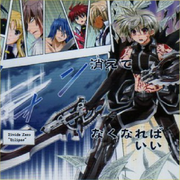 Retrieved from "https://nanoha.fandom.com/wiki/Divider-996?oldid=33162"
Community content is available under CC-BY-SA unless otherwise noted.