Due (ドゥーエ Dūe) is the second member of the Numbers, and was designed while having in mind the need to produce a unit capable of performing long-term infiltration missions in an independent fashion. Her IS allows her to reshape her body's appearance into any humanoid form and is especially calibrated to deceive the usual inspections made over one's self in most of the TSAB-administrated worlds. While in missions, her status quo is a classified information even among the other Numbers and the only ones who knows about it are Jail Scaglietti and Uno.

Like Tre and Quattro, Due's genetic material contains some genes of Scaglietti himself, and his influence over Due is the strongest among the Numbers. She was Quattro's mentor, who inherited many traits of Due's psyche and personal ambitions as a result of the time that they spent together.[1] After the completion of her long-term missions in stealing the Shroud of the Saint King and assassinating the TSAB High Council, she looked forward to be reunited with Scaglietti and her sisters, especially those designated with numbers 6 to 12, who she had never met before.

In episode 24 of StrikerS, she is killed by Zest Grangaitz after killing Regius Gaiz. In Sound Stage X, she is referred to posthumously by Jail, who asks for red wine to properly commemorate her death, in return for his services for the Bureau. 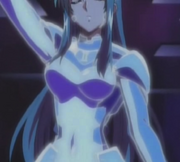 Retrieved from "https://nanoha.fandom.com/wiki/Due?oldid=33918"
Community content is available under CC-BY-SA unless otherwise noted.