Durandal (デュランダル Dyurandaru) is a Storage Device specialised in freezing spells. He is given to Chrono Harlaown, whom he refers to as "Boss", for the final battle in A's.

Durandal is a reference to the holy sword Durendal from The Song of Roland.

Durandal is developed by Gil Graham and the Liese twins, making use of the then-latest technology and functionality, in order to seal the Book of Darkness. His existence is first mentioned in A's (ep.7), but his first appearance (in standby form) is in A's (ep.10). He is later given by Aria Liese to Chrono on Gil's orders, for the final battle against the Defense Program of the Book of Darkness.

In the movie continuity, Durandal appears in The MOVIE 2nd A's and Detonation.

His origin has been rewritten that he was initially developed by Clyde Harlaown as a Lost Logia-tackling Device, but yet to be completed during the previous Book of Darkness Incident in 0054. After Clyde's death, Lindy Harlaown had completed his development.[2]

He first appears in his standby form when Lindy takes him out at the Harlaown residence. He then appears again when Lindy is reminiscing about her late husband to Signum, and is activated briefly by Lindy as a guard during her short encounter with Vita. Meanwhile he advises Lindy about the arrival of their allies before being used to cast any spells. In the final battle against NachtWal, he returns with Chrono for casting Eternal Coffin to freeze NachtWal's Eroded Form.

Although Durandal does not really have an individual will like the Intelligent Devices, he has a vocal answering system and a minimum level of self-judgment function. 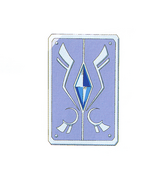 Retrieved from "https://nanoha.fandom.com/wiki/Durandal?oldid=32692"
Community content is available under CC-BY-SA unless otherwise noted.