Einhard, pronounced as "Einhart", is a proper German name, albeit for boys. Stratos is presumably a reference to the Lancia Stratos car. This spelling had been confirmed by ViVid anime (episode 5, Blu-ray BOX product name) and The Gears of Destiny media. However, her first name has also been transliterated as "Einhald" in ViVid Strike![3][4] and INNOCENT cards, and once as "Einhalt" (German for "interruption") in the Comp Ace magazine.[5]

Her alter ego is named Heidi Einhard Stratos Ingvalt (ハイディ・アインハルト・ストラトス・イングヴァルト Haidi Ainharuto Sutoratosu Inguvaruto), as introduced to Ixpellia in ViVid (ch.63). She sometimes shortens it to "Heidi E. S. Ingvalt", replacing her real name with the middle initials. The given name Heidi is an affectionate diminutive form of the German name "Adelheid", the modern version of "Adelheidis" (Old German for "nobility") and a cognate of the French "Adelais" and English "Alice". Interestingly, her ancestor Claus Ingvalt, whose surname her alter ego adopts, also has two middle initials in his name, "G. S.", whose meaning has not been revealed yet.

Einhard occasionally titles herself as Hegemon (覇王 Haō) due to her inheritance from the Ingvalt bloodline. Sieglinde Eremiah nicknames her Haru-nyan (ハルにゃん Haru nyan, lit. Einhard meow/kitty) in ViVid. In ViVid Strike!, Einhard asks Fuka Reventon to call her the same, but Fuka decides to call her Haru-san instead.

Just like Vivio, Einhard has complete heterochromia, although her eyes are purple and blue (right and left, respectively), rather than Vivio's green and red. Einhard's casual outfit resembles the one worn by Saber in Fate/stay night, which is somewhat ironic given that her ancestor's rival appears to be based on Saber.

Einhard has an extremely introverted personality, rarely speaking when not prompted but frequently engaging in inner monologues. Her speech is very careful and formal. Although she tries to hide it, she is easily embarrassed by displays of affection towards her, such as when she wakes up at Subaru's apartment after losing consciousness on the streets early in ViVid, or whenever she has to express affection herself, e.g. when Nove demands that she acknowledges the pleasure of meeting Vivio after the latter regains consciousness, not before that.

It is revealed in chapter 6 of ViVid, that Einhard Stratos is a direct descendant of Ingvalt, the Hegemon of Shutra around the time the Saint King Unification War ended. Ingvalt was among the strongest combat mages of his time and his magical prowess still manifests itself in his descendants, albeit only sporadically. Einhard's silvery-green hair and heterochromia are a mark of her inheriting Ingvalt's Kaiser Arts and the Adult Mode technique, as well as a handful of his memories.

It is this memories that determine Einhard's ambitions in ViVid. Ingvalt had, in his time, failed to protect something he held dear, namely the last Sankt Kaiser Olivie, and the regret for this has haunted him and his descendants for a hundred years. To atone for her ancestor's failure, Einhard aims to become stronger than the ancient kings, including the long-dead Olivie herself (by defeating her clone Vivio) and Ixpellia.

In chapter 10, Einhard explains to Vivio that Ingvalt's memories she inherited are very fragmented and although she can recall events from the Hegemon's as if they happened to herself, she does not see herself as his reincarnation. In ViVid (ch.101), however, after defeating Edelgard Barkas and claiming her Champion title, Einhard states that she can no longer recall Claus' memories, implying that his legacy is not influencing her anymore.

As revealed in chapter 5, Einhard Stratos is, in fact, the real identity of "Hegemon" Heidi E. S. Ingvalt, already foreshadowed by the latter's middle initials, which match Einhard's. As Heidi, she first appears in chapter 1, standing over unconscious bodies of street brawlers she picked up fights with on the streets of Midchilda. The event was captured on video, which Ginga Nakajima shows to her sisters, warning them to be careful at nights. Heidi is next seen in the end of chapter 3, when she confronts Nove and demands information on the location of Vivio and Ixpellia. Chapter 4 is dedicated exclusively to their fight, where Nove is soundly defeated but not before considerably weakening Heidi and planting a tracking device on her.

In chapter 5, Einhard reverts to her child form but faints from exhaustion and wakes up at Subaru Nakajima's house. After confirming her identity and that she is not after Vivio or Ixpellia's lives, Nove, Subaru, and Teana arrange a meeting with Vivio for her. Upon meeting Vivio, Einhard immediately acknowledges her as a Sankt Kaiser and agrees to spar with her but noticing that Vivio doesn't take their fight as seriously as she would like her to, Einhard defeats her with one powerful attack, astonishing the on-lookers. As she prepares to leave, apologizing for being so selfish, however, Vivio also apologizes for not meeting her expectations and offers a rematch in a week, to which she agrees.

During the rematch, Einhard realizes that she has no right to force her and Ingvalt's pain on Vivio. Still, they fight at full strength and Einhard wins again, knocking Vivio out. She, however, has trouble standing on her feet herself and has to rely on Teana and Subaru to maintain balance. When prompted, she acknowledges to have been previously wrong about Vivio and takes it upon herself to carry the still-unconscious Vivio to a place where she can rest.

Despite obviously caring for Vivio, there is still distance between them in chapter 8, which takes place some time after their rematch. Although initially reluctant to accept Nove's invitation to a trip to Carnaaji, she is eventually swayed by the promise of training with AA to S+ ranked mages, a chance to learn more about her family from Lutecia Alpine, and Nove's sheer forceful attitude. She decides to come along, much to Vivio and Nanoha's delight and her own embarrassment.

While swimming in a lake, she discovers that she cannot keep up with Vivio, Lio, Corona, and Lutecia, because, as Nove explains to her, these four have been specifically trained to act and fight underwater. Einhard does, however, display strong aptitude for "water cutting", utterly exhausting herself (and Vivio) until lunch. After lunch, she admits feeling jealous of Vivio, as she has always been alone in her training, but when Vivio points out that it is no longer the case, she agrees that even though Kaiser Arts and Strike Arts won't end up on the same path, she should go walk with Vivio, if only for a bit.

In chapter 10, Einhard tells Vivio about some of her memories from the Ancient Belkan era, both sad (such as her recollections about the Saint King Unification War) and joyful (Ingvalt's memories of Olivie). However, believing that she is upsetting Vivio, Einhard breaks off and desperately seeks a topic to cheer her up. At that moment, Nove finds them and calls to watch a mock battle between the former Riot Force 6 aces. Einhard is both shocked and impressed by their performance but Vivio explains their background and whisks her into the forest, where they practice glove hitting. Einhard comments that although it is a different exercise from what she is used to, it may be useful to her, much to Vivio's delight.

Later, Einhard participates in the 0079 DSAA Intermiddle championship. She faces off against Corona and ultimately defeats her.

During a jog in ViVid Strike! (ep.1), Einhard accidentally saves Fuka Reventon, who punches and eventually faints in front of her after a fight with gangsters in the preceding night. When Fuka visits Nakajima Gym after discharging from hospital, Einhard invites her to join the gym for learning combat skills, as well as for part time work. Einhard also teaches Fuka to cast Hegemon Sky-severing Knuckle, which is strong enough to strike Vivio out of the ring in their spar.

In ViVid Strike! (ep.9), Einhard calls Viktoria Dahlgrun to find Rinne Berlinetta, offering her a chance to win her U15 World Champion belt, which is to win Fuka in a one-on-one battle on the next day.

Einhard only makes a brief cameo appearance alongside Vivio on a single panel in Force (ch.17).

Einhard only appears in Gears of Destiny. After Team Nakajima participats in the 0079 Intermiddle Championship, she and Vivio time-travel back to 13 years ago (0066) because of Kyrie Florian's time paradox.

Einhald Stratos, similar to her initial appearance in the primary continuity, is the best friend of Vivio Takamachi, Nanoha Takamachi's daughter from the future. She and Vivio time-travel back to the past due to a problem of Jail Scaglietti's new machine.

Einhard is extremely skilled in Kaiser Arts, and is able to fight evenly against Vivio, even excelling her in terms of combat. She may enter Adult Mode for training and battles. Her Device is named Asteion.

Although practicing the Ancient Belkan system, Einhard casts Barrier Jacket as defense[6] (for her Adult Mode only), probably because she does not wield a weapon-handling Device like other knights nor maintain a Ritter Rank, just like the case of Subaru Nakajima.

She refers to herself in Barrier Jacket as Armed Form (武装形態 Busō Keitai),[7] similar to other practitioners of Ancient Belkan martial arts. Her Jacket consists of a light-green mini dress covered by a white jacket, long white socks, and black boots. There are also long, puffy sleeves on her dress, gloves around her hands, and a choker on her neck. Notably, her hairstyle and hair band/ribbon are changed by Asteion after receiving it. 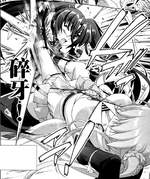 Retrieved from "https://nanoha.fandom.com/wiki/Einhard_Stratos?oldid=34205"
Community content is available under CC-BY-SA unless otherwise noted.