Erio Mondial (エリオ・モンディアル Erio Mondīaru) is a character in Magical Girl Lyrical Nanoha StrikerS. Along with Caro Ru Lushe, he is one of the many kids that Fate Testarossa Harlaown met and befriended while on duty, and one of the few that she actively looked after. He is a forward team member of Riot Force 6.

Erio is named after the Suzuki Aerio and for either the Ferrari Mondial or the Mondial Piega Strada motorcycle. However, his name is misspelled as "Erio Maondial" in StrikerS opening theme one.

Erio is typically polite and good-natured, and is portrayed as having an unusually solemn personality for a boy of his age and with a certain lack of common sense when it comes to elements of an ordinary lifestyle. Having come to understand how much Fate cares for him, he resolves to become independent so she will not worry about him, not realizing that in doing so, he causes her to think that he is hiding his problems from her.[4]

The person known as Erio is, in fact, a product of Project Fate, an Artificial Mage created to replace the original Erio Mondial, a son of a wealthy Midchildan family who died in his infancy some time before 0069. When Erio was four years old, he discovered the truth about his nature by accident and, abandoned by his parents, was taken to an illegal research facility, where constant experimentation almost destroyed his mind and body.[5] Even after he was rescued and placed in the Administrative Bureau's special care center for children with latent magical powers,[6] he continued exhibiting extremely antisocial and violent behavior, lashing out at people who tried to help him.[5] Upon his first meeting with Fate,[6] he attacked her with lightning, too, but she stopped the attack with her bare hands, finally breaking his resistance.[7] Since Fate was too young to officially adopt him at the time, Erio was instead adopted by Lindy Harlaown, with Fate becoming his guardian.[8]

Erio spent five years in the Administrative Bureau 01-24th Yurlis-Home,[1][9] where he learned magic and decided to join the Bureau's armed force. By the time when the events told in StrikerS began, he was a young private (3rd Ground Member) with ground mage rank of "B". According to Alph, Fate initially opposed this, but came to accept his decision.[4] Once transferred to Riot Force 6 after graduating from training academy, Erio was placed under the command of his former guardian in the Forward Lightning and code-named "Lightning 03". It has been hinted that he and his squad-partner, Caro Ru Lushe, are developing a romantic relationship.

Erio and Caro discover Vivio in an alley on a day off, and are called into action to secure some Relics while she is escorted back to headquarters. While caring for Vivio, Erio observes that her language skills are too advanced for someone her age, and suspects that she is a product of Project F.

During the attack on the Mobile Division 6 headquarters, Erio is injured by Deed while trying to stop Lutecia from escaping with Vivio. During the next week, he trains with Signum, managing to learn some of her techniques by watching her use them. In the final battle, he manages to defeat Lutecia's summon spirit Garyuu, and saves Fate from being crushed by falling debris in Scaglietti's base.

At the end of the series, Erio asks to transfer to Frontier Nature Conservation Corps and works with Caro at a wildlife conservation camp on the 61st world Supools.

Erio is introduced catching some poachers with the help of Caro and Fried. Subaru contacts him, and arranges for him and Caro to participate in the Mariage investigation. During the Marine Garden fire, he fights off the Mariage while Caro evacuates people.

Erio has grown a lot by the time of ViVid and now sports a ponytail. He still works together with Caro but they take a few days off when Fate informs them that she plans to go on trip with Vivio, having completed their assignment as planned. They are next seen on Carnaaji, where they meet up with the rest of the group, much to Fate's delight. In chapter 10, he, Caro, Fate, Nanoha, Subaru, and Teana participate in a spectacular mock battle.

In the team battle on the second training day, Erio takes the Guard Wing position of the Blue Team, opposing Fate. He does quite well against her even when she is not holding back, but while he manages to win, he is defeated by Teana's Starlight Breaker.

Erio first appears in chapter 5 of Force, when he and Caro are assigned back under Hayate's command in the Special Duty Section 6, created specifically to deal with the current Eclipse crisis.

In chapter 9, he is placed in the team that is sent into the Esquad Hückebein ship headquarters. He fights against DeVille of Hückebein until the Zero Effect activates, at which point he is conscious but weakened. After the rescue, Erio and Vita fire the Esquad with Strike Cannons until Hayate is permitted to cast Heimdall, and are then injured by Curren Hückebein.

From chapter 21, together with other members, Erio is responsible for safeguarding of the transportation of AEC Armaments to the Section's base, and is involved in the battle against the Grendel family.

Erio is a practitioner of the Modern Belka magic system. Before joining Riot Force 6, Erio has also learned from Fate a few of her Midchildan spells. Erio is capable of telepathy.

Erio possesses a spear-shaped Armed Device named Strada, whose function allows him to perform limited level of aerial combat. His specialties lie in electric-based magic due to his lightning-type Mana Conversion Affinity, and high-speed close combat (probably also due Fate's training). Because of that, he is given the Guard Wing position of the Forward Team in Riot Force 6, where he is supposed provide quick support to all his allies, regardless of their position in the battlefield.

By the end of StrikerS, Erio can also ride Friedrich.

Being a user of the Modern Belka system, Erio's defensive outfit is referred as a Barrier Jacket instead of Knight Armor. Like Caro, Erio's Jacket is called Lightning Style, based on Fate's Impulse Form and offering higher mobility and lower mana consumption at the cost of defense. It mainly resembles Fate's white overcoat and steel shoes.

Erio is one of the few prominent male characters in the Nanoha series (owing to its magical girl genre and, further down the line, bishōjo game origins). 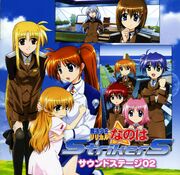 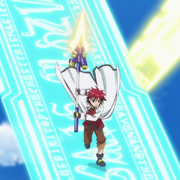