Friedrich (フリードリヒ Furīdorihi) is Caro Ru Lushe's dragon companion, whom she has had since he was hatched.

Friedrich's name may be a reference to Friedrich Nietzsche. An alternative spelling of it is "Friedlich" (Ger. "peaceful").

When the Numbers attack the headquarters of Riot Force 6, Friedrich is bound by Otto and reverts back to his baby dragon form after plunging down into the sea. He is later seen unconscious beside Caro, moments before she summons Voltaire.

Caro brings Friedrich along with her during the trip to Carnaaji, where Friedrich participates in several trainings and mock battles.

In Force (ch.23-24), Friedrich assists Caro to battle against the Grendel family.

Despite Fried's initial appearance as a baby dragon, his true form is eventually revealed to be that of an adult one. Although not as powerful as Caro's trump card Voltaire, he possesses considerable destructive power, therefore she has to seal his true form away to allow him to follow her in a familiar-like fashion instead of having to summon him.

In the sealed form, Friedrich possesses only a fraction of his full power and his attacks are restricted to low-power fireballs that can be easily dodged by a skilled opponent.

In Force, Friedrich may be equipped with Caro's S2 Shields to become Vanguard Dragoon. 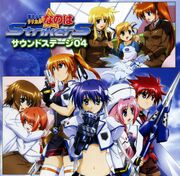 Retrieved from "https://nanoha.fandom.com/wiki/Friedrich?oldid=33935"
Community content is available under CC-BY-SA unless otherwise noted.