Ground Armaments Service (陸上警備部/隊 Rikujō Keibi Bu/Tai, official abbreviation GAS)[1] is the ground branch of the TSAB armed forces managed by the Main Office. Notably, it does not include the Capital Defense Corps which is directly under the management of Midchildan Ground Headquarters (Mid-GH) and has different uniforms.

The ground forces uniform consists of a brown double-breasted jacket with a dark brown yoke, worn over a white shirt or blouse, with a matching pair of pants or skirt. The uniform is typically worn with a black tie, however this appears to be at the discretion of the individual. Officer uniforms include silver shoulder boards, and senior officers wear a white lanyard from their belt across their left hip.[2][3] Medical personnel wear a white lab coat over their normal uniform.[4]

Notably, different subdivision names may be printed on the ribbon part of the GAS emblem. 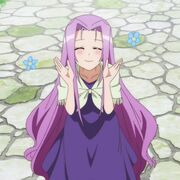 Retrieved from "https://nanoha.fandom.com/wiki/Ground_Armaments_Service?oldid=29944"
Community content is available under CC-BY-SA unless otherwise noted.