Gun Knuckle (ガンナックル Gan Nakkuru) is Nove's Device-like Inherent Equipment introduced in StrikerS. It is a state-of-the-art equipment developed by Jail Scaglietti and Uno while having Subaru Nakajima's (or, more likely, Quint Nakajima's, after the Combat Cyborg Incident) Revolver Knuckle as a basis.

By the time of ViVid (or more likely when Nove completes the rehabilitation program before Sound Stage X), Gun Knuckle is synchronized with Jet Edge, similar to Revolver Knuckle with Mach Caliber. It seems to have been upgraded into an Armed Device.

It appears as a gauntlet with an energy gun inbuilt installed on the back wrist and can fire energy bullets like a machine-gun, e.g. Gun Shooter. 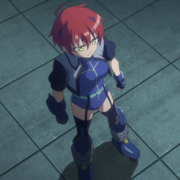 Retrieved from "https://nanoha.fandom.com/wiki/Gun_Knuckle?oldid=30622"
Community content is available under CC-BY-SA unless otherwise noted.