She is also nicknamed Buster Head ( Basutā Heddo) due to her battle style and skills.

Hot-headed and aggressive, Harry is one of the best fighters during the championships. She can be described as calm and relaxed when nothing is bothering her, but when something does, she will snap and not care about her manner. Notably, she does a have a playful side with Els Tasmin, by picking fights with and nicknaming her.

Harry enrols in the 0079 DSAA Intermiddle Championship. It is her fourth time joining so, and her personal best so far is city-wide top 5.

She is first seen in ViVid (ch.17), together with her "minion" classmates in her high school. Rio Wesley and Corona Timil run into her by chance in ViVid (ch.18), and obtain her autographs.

Harry is a U19 Player and only makes a minor appearance in ViVid Strike! She is a member of Frontier Gym,[1] where she occasionally trains herself and spars with Rinne Berlinetta.[3] However, unlike Viktoria's case, apparently she does not represent Frontier Gym in championships based on the character grouping on the anime website.

In episode 5, she and Els visit Nakajima Gym to act as Fuka Reventon's sparring partners under Mikaya Chevelle's arrangement. They also act as seconds of Fuka in episode 5.5 (OVA) alongside Yumina Enclave. From episode 6 onwards, they watch the 0080 Winter Cup tournament and the private match between Fuka and Rinne Berlinetta together.

Harry equips with Red Hawk, her chain-shaped Device which is usually chained on her left wrist like a gauntlet when set up. Her specialty is "cross range shooting/bombardment", a mixture of hand-to-hand combat and magic attack. As a result of her battle style and skill, Harry is known as "Non-Style Infight Shooter". 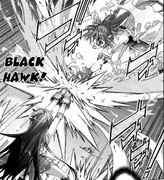 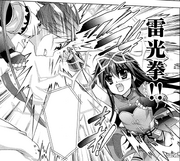 Retrieved from "https://nanoha.fandom.com/wiki/Harry_Tribeca?oldid=34046"
Community content is available under CC-BY-SA unless otherwise noted.