Isis Egret (アイシス・イーグレット Aishisu Īguretto) is a character first introduced in Magical Record Lyrical Nanoha Force. She is a traveler originally from Rigate,[2] which is located in Northeastern Midchilda.

Isis is presumably named after Toyota Isis, despite the namesake Ancient Egyptian goddess of motherhood and fertility. Egret is a subspecies of herons.

Isis is an energetic girl who is constantly in pursuit of fun and interesting things, for which she would go as far as to obstruct an official police investigation for no reason other than the thrill of it. She is also courageous enough to throw herself into a fight to defend her friends without hesitation. On the other hand, she wants to hide her family name and her relationship with Egret Security Service from others.

Isis first appears in chapter 2 (although a brief flashforward of the same chapter is included in the prologue) as an owner of a small clothing shop in Port Town, Ruwella, which she runs to cover her traveling costs. She is, in fact, a hardened traveler and adventurer who also happens to have a hobby and talent for making clothes. Thoma Avenir buys some clothes for Lily-Strosek from Isis and she also takes care of Lily's haircut. Afterwards, Isis, obviously interested in Thoma and Lily, warns them that police is searching for them and helps them escape, in return for them agreeing to take her with them on their travels.

In chapter 3, it is revealed that Isis ran away from home to travel and that she is opposed to any violence. However, during Thoma's fight against Veyron in chapter 4, she leaves Lily and rushes to his aid. When it looks like Veyron would overpower Thoma, she jumps between them to protect her friend but Veyron doesn't attack, leaving her a message for Thoma. After that, she carries unconscious Thoma back into the forests and is surprised to see his badly burned arm completely healed.

After briefly regaining consciousness, Thoma goes down with a fever. Lily believes that she is the "poison" killing Thoma but Isis comforts her saying that it probably not true. She then leaves for Port Town to get some food and medicine. On her way back, however, Isis admits that Lily's words are probably true and deduces that she is a biological weapon and Thoma, its victim. She realizes that she risks being either killed or arrested by associating with them but decides to not abandon her friends. She also mentions that as long they don't die her "true identity won't be revealed".

When Signum and Cypha begin battle over Thoma and Lily, the Port Town authorities declare emergency state. Hearing that, Isis, who is already on her way back, reveals herself as a skilled aerial mage and, jumping off a high cliff, speeds up to where she left Thoma and Lily. On her way back, she meets Steed and orders it to search for a quick escape route. When she arrives to Lily's location, the battle between Signum and Cypha is still on-going and Thoma is still unconscious. She urges Lily to flee with her and when she tries to object, cuts the talk short and asks her to keep it together. When Isis attempts to lift Thoma up, however, he regains consciousness and pushes her away, screaming in pain. Cypha comments that since he awakened, he must be one of them.

While Cypha fights Signum, Thoma, apparently having lost any sense of self, summons the second form of his Barrier Jacket almost attacks Lily and Isis but all three of them are restrained by the newly-arrived Arnage. Isis attempts to break free but Arnage knocks her out. Although Cypha is initially reluctant to take an "extra" (she wasn't even aware of Isis' presence until then) with them, Arnage persuades her to, because Thoma probably cares about her.

Isis only appears briefly in Gears of Destiny in the flashback of Thoma and Lily and the ending of Story Mode after Thoma and Lily returned to their timeline.

Much like the protagonists from the previous series, Isis has shown to be a capable aerial mage with decent skill, which is even appreciated by Nanoha Takamachi. She is able to follow Thoma in discreet and keep herself at a safe distance when he confronts Veyron. Isis also appears to have some level of enhanced mobility, having moved in front of Thoma almost instantly after Veyron announces her presence, enough for the Hückebein to momentarily comment of that.

Isis presumably practices a magic system but like Jail no magic circle or spell ribbons are shown[1] However, instead of casting magic spells, on battlefields she is an "Explosive User", using explosives and chemicals a.k.a. "perfume" mixed by her self-made Device-like equipment, Perfume Glove. This gear and her protective clothing are both out of the Midchildan system but driven by fuel battery.

As a trainee of the Special Duty Section 6, Isis has also used a Strike Cannon painted in her personal color for training, and a Javelin for escorting.

Isis has a unique protective clothing called Armour Jacket. Unlike normal Barrier Jackets powered with mana, her Jacket is powered by fuel battery. It provides incredible levels of protection for Isis: when DeVille catches her off guard and attempts to decapitate her, her Jacket takes most of the blow, and although DeVille is left with the impression of having broken Isis' neck, she is shown to be alive and conscious moments later.[3] 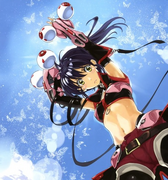 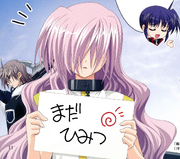 Retrieved from "https://nanoha.fandom.com/wiki/Isis_Egret?oldid=33923"
Community content is available under CC-BY-SA unless otherwise noted.