Kerykeion (ケリュケイオン Keryukeion) is Caro Ru Lushe's Boost Device, specializing in mana augmentation. Scrapping the complex magic support functions found in regular Devices, Kerykeion boosts Caro's own mana, and specializes in releasing it in the most suitable form for the task at hand. Her programming language is English.

Kerykeion means "herald's staff" in Greek, which is known in English as Hermes' Caduceus staff.

Kerykeion makes her first and main appearance as Caro's equipment in StrikerS and StrikerS manga. She also appears briefly in Sound Stage X, ViVid and Force.

Kerykeion was tuned with two main points in mind: to reduce the amount of mana needed during Summoning, and to strengthen Boost magic. She plays a good role of a sensor to detect enemies and summonings. As for AI, Kerykeion is relatively amenable. In the words of the device meister Shario Finieno, the Lightning Squad devices are "pretty similar in personality to their users".

As Kerykeion is in the form of two gloves, with two support engines it can cast two different boost spells simultaneously (one Boost Up, one Enchant), known as Twin Boost (ツインブースト Tsuin Būsuto). It is first seen in StrikerS (ep.5), cast on Erio Mondial and Strada to increase their striking strength and cutting capacity respectively. This is then known as Twin Boost "Slash & Strike", being a combination of Boost Up "Strike Power" and Enchant "Field Invade". 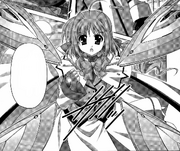