It appears to have a personality but no programmed gender, and speaks German like other Ancient Belkan Devices.

Its name is a reference to Norse mythology, where Lævateinn was an invincible flaming sword wielded by the giant Surtr against the gods during Ragnarök (the end of the world).[1]

In the movie continuity, it is renamed as Laevatein Modified (レヴァンティン改 Revantin Kai) after the upgrade in Reflection. Such simple renaming may be due to the urgent and hence non-complex upgrade.

Laevatein is first introduced in the A's manga prologue and then featured in A's, StrikerS manga, StrikerS and Force.

After the Book of Darkness Incident, its structure has been optimized in the epilogue of A's manga. It has also been optimized a few times by Mariel Atenza during the period of StrikerS.[2]

In Force, Laevatein is the first traditional Device used against a Divider and the Eclipse. Although it is evenly matched with (if not superior to) Cypha's Divider-944, attacking her body directly causes significant damage to Laevatein, which is covered in cracks afterwards. As the battle continues and Cypha Reacts, she effortlessly shatters Laevatein near the hilt with her elbow and injures Signum. Laevatein is seen in action again in ch.20 during Signum's rehab spar with Thoma Avenir, with its functionality apparently fully restored.

In the movie continuity, no significant change is noted in The MOVIE 2nd A's except for the minor changes in designs. In Reflection, Laevatein is urgently upgraded into Laevatein Modified by Mariel Atenza after being overpowered by Kyrie Florian's System Alter. It is equipped with an EM Cartridge System, and its form-change mechanism into Schlangeform is temporarily frozen.[3]

Laevatein's forms and functions are probably designed after the Angelg and Vysaga, two mechs piloted by Lamia Loveless in Super Robot Wars. Schwertform and Signum's general fighting style are themed after Vaisaga's sword, Schlangenform is themed for Lamia herself in reference to the mythological lamia, and Bogenform is themed after Angelg's bow, which can perform the Phantom Phoenix attack in the games much like Bogenform's Sturmfalken. 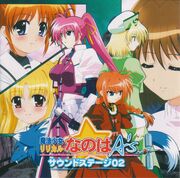 Retrieved from "https://nanoha.fandom.com/wiki/Laevatein?oldid=31476"
Community content is available under CC-BY-SA unless otherwise noted.