In Force (ch.1), one of her captors refers to Lily as Strosek 4th (シュトロゼック4th Shutorozekku Fōsu), the fourth creation of the Strosek series Reactor.

Lily appears to have a meek, delicate personality, preferring to express herself wordlessly, with mimic and gestures, which is probably influenced by her frail constitution (Thoma has to carry her on his back at first). She does not, however, fall under the common anime and manga stereotype of a naive girl-in-the-box, as she displays awareness of the fact that Thoma goes to extraordinary lengths to help her, and hesitates before making a pact with him (which she likely knows to be harmful in a long run).

According to Cypha and Curren, Lily was likely created by the Vandein Corporation using the Book of the Silver Cross as a reference (similar to Reinforce for the Book of Darkness and Reinforce Zwei for the Tome of the Night Sky). Held captive by Vandein in a secret facility at some ruins on planet Ruwella, she was forced to serve a source of infection for the Eclipse Virus. However, all the test subjects who came in contact with her ended up dying. This would continue until Lily's mind began breaking down, likely due to trauma. Eventually, the scientists who oversaw the experiment gave up on finding a suitable Driver and prepared to abandon the facility while Lily was to be "scrapped."

Lily first appears when she telepathically contacts Thoma as he reaches the ruins where she is held, begging him to help her. As "reacting" happens between them, Thoma experiences pain and bleeding in his left eye, which then turns red in color. Noticing it, Lily asks him to leave but he frees her from her bonds, instead. As Lily's captors attempt to incinerate them both, Thoma promises to help her, no matter what happens, but his powers are not sufficient to defend them. Although initially reluctant, Lily resolves to engage with him, boosting his powers. In the aftermath, they both end up wearing silver Engage Rings that are impossible to take off.

After escaping the ruins, Thoma carries Lily to Port Town, where they buy new clothes for her. When they stay at a hotel, she attempts to thank Thoma for what he has done for her but Thoma refuses to be thanked. She is currently traveling with Thoma and Isis Egret.

During Thoma's fight against Veyron, Lily is not present but overcome with sudden weakness when Thoma activates his Divider further. When Thoma regains consciousness afterwards, the first thing she does is apologize to him without explaining exactly what for. However, considering Veyron's comments earlier in the chapter, Thoma is left in the dark about Lily's true nature and was "infected" with Eclipse by her, which is probably the reason behind her guilty feelings. After Thoma goes down with a fever, Lily claims it is her fault, that she is the poison killing him. She explains to Isis that the scientists at the facility said that she will kill whoever she touches or comes into close contact with, but she believed it was a lie until now. Isis reassures her that it probably is and tells her not to trust suspicious people, before leaving for Port Town.

At sunset, Steed also leaves Thoma and Lily to scout the area, because he cannot receive Lily's telepathic messages, anyway. Soon thereafter, Thoma awakens and throws up. Unsure what to do, Lily frantically calls out to Steed and Isis but her telepathy doesn't reach neither them, nor Thoma. At this moment, Cypha of Hückebein finds them and tells her to let him be, as he is becoming "just what an Eclipse Driver should be" and that Lily would soon "become one" with him. Lily does not understand what she is saying, so Cypha concludes that she has taken "moral damage" and forgotten her "duty as a React Plug". Cypha then moves to secure Thoma and when Lily shields him with her body, comments that her "judgment function" must also be broken. Just as Cypha is about to strike Lily, she and Thoma are saved by the timely arrival of Signum and Agito.

Referring to Lily as a "damaged Plug", Cypha orders Lily to observe her battle against Signum closely, because doing so will help her "remember what 'she' should become". She also advices her not to move if she wants to live, since TSAB have no problem with "erasing" her, and she will not be able to look after her in the heat of battle. As the two swordswomen fight, Lily expresses a distinct reaction (perhaps, recognition) when Signum enters Unison with Agito. While the battle is still on-going, Isis returns and urges Lily to flee with her. Lily tries to object but Isis persuades her to come along. When Isis tries to lift Thoma up, however, he regain consciousness, pushes her away, and lets out a scream. Cypha comments that he has become one of them.

While Cypha fights Signum, Thoma, apparently having lost any sense of self, summons the second form of his equipment and almost attacks Lily and Isis, but all three of them are restrained and knocked out by the newly-arrived Arnage. Although Cypha is initially reluctant to take a "damaged Plug" with them, Arnage persuades her to, because Thoma probably cares about her.

Along Thoma and Isis, she becomes a member of Special Duty Section 6 after the rescue of their group.

Lily appears in Gears of Destiny and react-engages with Thoma in battles. After one year's plot of Force, Thoma and Lily time-travelled back to 16 years ago (0066) because of Kyrie Florian's time paradox.

Lily is an artificial being known as Strosek, i.e. humanoid Reactor, which is part of "Eclipse". After recalling her abilities, she displayed the ability to React-Engage with Thoma (a state similar to Unison) and can exercise control over the Bible of Silver Cross, which becomes her primary device. She later also seemed to have acquired the ability to sense nearby Eclipse Drivers.

As a trainee of the Special Duty Section 6, Lily has also used a Strike Cannon painted in her personal color for training and adopts a Javelin chapters of Force.

In Force (ch.24), Lily displays a defensive move which is possibly the shield-type defense under Eclipse system. Although it is apparently similar to the divide effect against magic, Lily casts it to defend against Mariya Ranevskaya's non-magical attack. 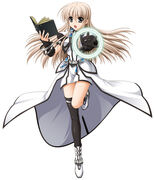 Retrieved from "https://nanoha.fandom.com/wiki/Lily-Strosek?oldid=33249"
Community content is available under CC-BY-SA unless otherwise noted.