Lutecia Alpine (ルーテシア・アルピーノ Rūteshia Arupīno) is a purple-haired girl in Magical Girl Lyrical Nanoha StrikerS accompanied by Zest Grangeitz and Agito, and all three of them seem to help Jail Scaglietti for their own personal reasons. She is also a powerful insect summoner who hides the feelings of extreme isolation and loneliness inside.

Lutecia is named after the Renault Lutecia and Alpine the automobile manufacturer.

She is nicknamed by others as Lu or LuLu, e.g. Lu-chan (by Caro Ru Lushe), Lu-ko (by Hayate Yagami etc.), LuLu (by Agito etc.) and LuLu-tchi (by Chantez Apinion); and addressed by Nove as Lady (お嬢 Ojo) and certain Numbers as Dear Lady (お嬢様 Ojo sama).

Lutecia's appearance in StrikerS (Barrier Jacket along with hair and forehead markings) cause her to resemble strongly the Servant Rider from Fate/stay night series, which has since earned Lutecia the fan nickname "Loli-Rider".

Lutecia initially has a very calm and taciturn attitude in StrikerS, rarely getting flustered, annoyed, or panicked. In Sound Stage X, she is likewise depicted as an extremely quiet and reticent person. However, her personality changes drastically in ViVid, wherein she becomes a lively and extremely energetic young woman.

The three worked with Scaglietti on getting Relics, but Lutecia was the only of the three that trusted Scaglietti and his Numbers. Zest and Agito tried to convince Lutecia that Scaglietti wasn't worth trusting, but were unsuccessful as Lutecia viewed Scaglietti as a kind man. Because of her trusting attitude, Scaglietti was able to manipulate her actions to an extent. She was treated by the Numbers like their superior, even to the extent where they called her "Lu-ojou-sama" (approx. "Miss Lu"). In addition towards the end of StrikerS, Erio Mondial and Caro Ru Lushe manage to convince her to change sides while the Saint's Cradle was rising. Lutecia's main ambition was to obtain the Relic that Jail promised he would use to revive her mother, Megane Alpine. After the JS Incident, Lutecia enters rehab, with a powerful 6-rank limiter placed upon her. During the credits of StrikerS, Lutecia is shown living with her mother on a different planet, and using her summons to send messages to the two friends who helped her. Her limiter is removed some time after her release from rehabiliataion and Megane's awakening from coma.

She and Zest have been referred to on one occasion as Relic Weapon Experiments (レリックウェポンの実験体 Rerikku Wepon no Jikkentai) by Scaglietti.

In Sound Stage X, Lutecia and Agito are shown when Agito is visiting Lutecia on the planet she was deported to. Vivio Takamachi asks Lutecia and Agito to help decode an Ancient Belkan writing that has been found at a crime scene. Having learned this language during their time with Jail Scaglietti, the two manage to translate and provide a clue as to who the Toredia Graze mentioned in the writing is.

Unlike her energetic personality in the manga taking place a year later, she still retains her calm and quiet demeanor in SSX.

Lutecia made her first appearance in ViVid as a minor cameo, receiving a picture of Vivio and her friends in the first chapter. Vivio notes that while Lutecia is her friend now, she was once an enemy in the Jail Scaglietti incident.

She enters the story proper again in chapter 8, when Nanoha Takamachi and Fate T. Harlaown organize a trip to Carnaaji, where the Alpine family now lives, for Vivio and her friends. Four years of happy life with her mother have changed Lutecia's previously emotionally repressed personality dramatically. She is now an extremely outgoing and enthusiastic young woman, who is very proud to have built an enormous training and resort facility for her guests. She goes as far as poking fun of Caro for her being not as tall as herself.

In the same chapter, it is shown that Lutecia has undergone the same intense swimming training as Vivio, Rio Wesley, and Corona Timil (the latter two of whom she meets for the first time in person). She is next seen fetching the memoirs of Claus Ingvalt from her library, which Nove wanted her to show to Einhard Stratos, with Corona and Lio. From the memoirs, the three girls learn more about the Hegemon and his relationship with Saint King Olivie Segbrecht, which generally correlates with Einhard's genetic memories.

Later, Lutecia informs Corona that she is almost done crafting a new Intelligent Device for her. The next morning, she wakes up early to find that Corona has been practicing with her new Brunzel. She is glad to hear that the two of them get along and reminds Corona to demonstrate the Golem creation magic she has been practicing in secret to others later.

When the team training battle begins, Lutecia is assigned 2200 hit points and takes the Full Back position of the Blue Team, opposing Caro. She immediately summons a number of daggers (probably Todesdolch) and wonders whether she or Caro will do a better job at supporting their respective teams.

When Vivio takes damage fighting Einhard, Lutecia heals her, and asks Erio to hold off Fate while she does so. After Einhalt attempts to attack Nanoha and is nearly defeated, Lutecia tells her teammates to execute a pre-discussed plan, in which she and Lio attack Caro, Subaru Nakajima and Vivio attack Nove, and Nanoha and Erio attack Fate. Lutecia and Lio are defeated when Corona's golem Goliath takes them by surprise by shooting its fist at them, but Nanoha manages to incapacitate Caro and bind Corona. The battle ultimately ends in a draw, with Subaru and Corona immobilized and everyone else knocked out.

After the other two matches of the day, including one in which Lutecia fights alongside Garyuu, Lutecia reveals that the DSAA is holding an Inter-Middle tournament between combat magic users, which interests Vivio and Einhard. Lutecia reveals that she is entering, too, which would indicate that the restrictions placed on her have been lightened or do not apply. After Megane mentions that Einhard will need a Class 3 Ancient-Belkan Device, Lutecia mentions that Agito and the Yagami family could provide her with one.

In ViVid (ch.49), Lutecia identifies herself as a TSAB Contract Mage to Fabia Crozelg.

Lutecia only makes a minor appearance in ViVid Strike! (ep.9), when she visits the mock battleground of Hotel Alpine with Fabia and Sieglinde Eremiah, talking about Fuka Reventon and Rinne Berlinetta's fight scheduled on the next day.

Due to the kidnap by Jail Scaglietti at infancy, Lutecia uses an original Belkan magic system[6] and has the ability to use summoning magic. Presumably, her original system is later deemed as or become part of the Modern Belka system for categorization purpose.[7]

Like most users of summoning magic seen so far, Lutecia possesses a Boost Device named Asclepius and is also capable of healing spells. Specifically, Lutecia is skillful at summoning and controlling insects. Her summons include the powerful insectoid Garyu, the formidable humanoid bug Hakutenou, and the large beetle-like Jiraiou. Her most commonly used summoning spell, Insektzug, allows her to summon small Insekten (German for insects) capable of control over inorganic matter. They can manipulate Gadget Drones, thus giving them better movements and allowing them to fight more efficiently. In addition, her Jiraious are able to fire powerful beams of electricity that are able to match Friedrich's Blast Ray attack.

At some time, after Lutecia was born, it is revealed by Quattro that Jail planted a "circuit" inside her, and once activated it forces her to use her powers to her limits, but in exchange she becomes berserk.[citation needed]

By the time of ViVid, Lutecia practises the Belkan-Midchildan hybrid system like Vivio and specialises in pure magic battle (i.e. minimal cross combat).[4] It is also revealed that Lutecia acquires the ability of a Device Meister as she is responsible for crafting Brunzel, Corona Timil's Intelligent Device.

In StrikerS, Lutecia's Barrier Jacket[8] (also her usual outfit) is a black strapless dress with purple frills. By the time of ViVid, Lutecia has a new design for her Barrier Jacket, which is based off the old outfit in StrikerS but with more layers. 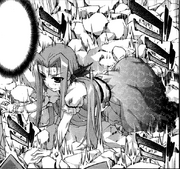 Retrieved from "https://nanoha.fandom.com/wiki/Lutecia_Alpine?oldid=32076"
Community content is available under CC-BY-SA unless otherwise noted.