In the portable continuity, Material-L is the Material in charge of "power" (力 chikara),[2] part of the System U-D materialised as a clone of Fate Testarossa during the Dark Fragment Incident. She is first introduced in The Battle of Aces in English Material-L and in Japanese "Assailant of Thunderblade" (雷刃の襲撃者 Raijin no Shūgekisha).

In the sequel The Gears of Destiny, it is revealed her full name/title is Levi the Slasher (レヴィ・ザ・スラッシャー[3] Revi za Surasshā, usually rubied as ), which may be shortened as Levi (レヴィ Revi, usually rubied as ). Levi is short for "levin", an archaic word for "lightning". Nevertheless, in the scenario U-D still calls her Material-L in Japanese.[1]

In the movie continuity, her name is merely Levi (レヴィ Revi). She also introduces herself to Fate with the title "Levi of Lightning"[4] (雷光のレヴィ Raikō no Revi).

Material-L looks like her original, Fate, except that her hair is light blue instead of blond. Her pupils are always contracted, like the other two Materials.

Levi appears in Reflection and Detonation.

She is the materialised state of a "soul" awakened by the Tome of the Night Sky's pages, with reference to Fate's appearance and magic talents,[5] in 0067 instead. In Detonation, it's revealed that Stern, Levi and Dearche were originally cats who lived with Yuri and Iris. During Yuri face against Phil Maxwell in 40 years ago, along with Levi and Dearche was bite Phil's shoulder to save Yuri. After the bite, Yuri tells the cats to hide inside the Book of Darkness. Due to Yuri never releases the cats from the tome, the cats died inside the tome.

Levi Russel (レヴィ・ラッセル Revi Rasseru) is an international student studying abroad in Uminari City, owning the title "Levi the Slasher" for Brave Duel games. As a human, her pupils are no longer contracted. Her battle-related designs are based on Fate's in The MOVIE 2nd A's instead.

Levi wields an axe-shaped Device named Vulnificus. It is a copy of Bardiche Assault, but its primary color is dark indigo and its gem is blue.

In The Battle of Aces, Material-L is one of the most powerful characters, combining Fate's speed in melee with Signum's weapons finesse and long-range defenses and Chrono Harlaown's extensive Full Drive enhancement skills. After Levi acquires her new powers upon reviving in The Gears of Destiny, lightning effects of her spells also change from golden-purple to her new/true aqua blue (水色 mizuiro)[6] magic color.

As revealed in The Gears of Destiny Material Girls., Levi's protective clothing, presumably a Midchildan Barrier Jacket, is known as Slash Suit ( Surasshu Sūtsu, lit. Assault Clothing). Its design (except colors) is same as that of Fate's Barrier Jacket "Lightning Form" in A's.

In The Gears of Destiny, Levi's Slash Suit gains a speed-oriented variation named Sprite Form (スプライトフォーム Supuraito Fōmu). Its design (except colors) is same as that of Fate's Barrier Jacket "Sonic Form" in A's.

In the movie continuity, Levi's Slash Suit has instead an original new design, although its overall style is still similar to Fate's. 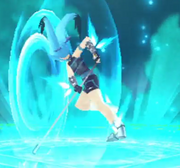 Retrieved from "https://nanoha.fandom.com/wiki/Material-L?oldid=33992"
Community content is available under CC-BY-SA unless otherwise noted.