In the portable continuity, Material-S is the Material in charge of "logic" (理 ri),[2] part of the System U-D materialised as a clone of Nanoha Takamachi during the Dark Fragment Incident. She is first introduced in The Battle of Aces in English Material-S and in Japanese "Annihilator of Starlight" (星光の殲滅者 Seikō no Senmetsusha).

In the sequel The Gears of Destiny, it is revealed her full name/title is Stern the Destructor (シュテル・ザ・デストラクター Shuteru za Desutorakutā, usually rubied as ), which may be shortened as Stern (シュテル Shuteru, usually rubied as ), German for "Star". Nevertheless, in the scenario U-D still calls her Material-S in Japanese.[1]

In the movie continuity, her name is merely Stern (シュテル Shuteru). She also introduces herself to Nanoha with the title "Stern of Annihilation"[3] (殲滅のシュテル Senmetsu no Shuteru).

Material-S looks like her original, Nanoha, except that her hair is brown rather than auburn, and cut much shorter. Her eyes are also light blue rather than dark blue, and her pupils are always contracted, like the other two Materials.

Stern appears in both Battle of Aces and Gears of Destiny.

In The Battle of the Aces she reveals that she is the Dream of the Book of Darkness thus recognizing Fate Testarossa (unlike Nanoha) and commands her to return to her depths during Fate's path.

Stern is very polite and calm, but nevertheless extremely dangerous. She is also respectful to strong opponents whom she loses to, e.g. explaining the Materials to Reinforce, admitting Yuuno Scrya (Nanoha's magic teacher in her cognition) as her teacher (師匠 shishō) etc.

Stern appears in Reflection and Detonation.

She is the materialised state of a "soul" awakened by the Tome of the Night Sky's pages, with reference to Nanoha's appearance and magic talents,[4] in 0067 instead. In Detonation, it's revealed that Stern, Levi and Dearche were originally cats who lived with Yuri and Iris. During Yuri face against Phil Maxwell in 40 years ago, along with Levi and Dearche was bite Phil's shoulder to save Yuri. After the bite, Yuri tells the cats to hide inside the Book of Darkness. Due to Yuri never releases the cats from the tome, the cats died inside the tome.

Stern Starks (シュテル・スタークス Shuteru Sutākusu) is an international student studying abroad in Uminari City, owning the title "Stern the Destructor" for Brave Duel games. As a human, her pupils are no longer contracted. Her battle-related designs are based on Nanoha's in The MOVIE 2nd A's instead.

Stern's Device is a staff named Luciferion. It is a copy of Raising Heart Exelion, but its primary color is metallic red and its gem is purple.

In The Battle of Aces, Material-S is one of the most powerful characters, combining Nanoha's long range attack power with Vita's melee and Zafira's defense skills. After Stern acquires her new powers upon reviving in The Gears of Destiny, fiery effects are added to her spells, matching her new/true magic color and the names of her spells.

As revealed in The Gears of Destiny Material Girls., Stern's protective clothing, presumably a Midchildan Barrier Jacket, is known as Heat Suit ( Hīto Sūtsu, lit. Exterminate Clothing). Its design (except colors) is same as that of Nanoha's Barrier Jacket "Sacred Mode" in A's.

In the movie continuity, Stern's Heat Suit has instead an original new design with a chest armor plate, although its overall style is still similar to Nanoha's. In addition, Her left arm is also equipped with Blast Claw, which looks like a gauntlet of his protective clothing.

In the scenario of The Gears of Destiny, Stern probably casts a copy of Exelion Buster (using Disaster Head) to vaccinate U-D when her attention is drawn away by Levi the Slasher. Her command phrase here is "Blast Shoot!"[5] She also casts copies of Axel Fin and Strike Flame for flight support and Disaster Head (A.C.S Open Mode), respectively.

Although not revealed in the series, all these copies should have different names from Nanoha's original spells, based on the naming of Stern's other copied spells. 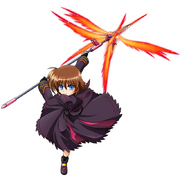 Retrieved from "https://nanoha.fandom.com/wiki/Material-S?oldid=34139"
Community content is available under CC-BY-SA unless otherwise noted.