The Book, originally known as the "Tome of the Night Sky" before it was corrupted, was a Lost Logia Unison Device: an intelligent creation of Ancient Belkan mages whose names have been lost to time. Its final master, Hayate Yagami, had reprogrammed it and separated the Defense Program from other components.

"NachtWal" literally means "NightWhale" in German. "Wal" is perhaps a misspelling or a deliberate pun on "Wall" (Ger. "rampart, ridge"). NachtWal may also be an abbreviation of "Walpurgisnacht". Reinforce and Hayate sometimes shortens its name as Nacht (ナハト Nahato, Ger. "Night").

It was formerly nameless and merely referred to as the Defense Program (防御プログラム Bōgyo Puroguramu) in A's. This is mainly because, except for its Eroded Form described below, it is only represented by the warpaint-like erosion marks on the body of the Will of the Book of Darkness, without other physical manifestation. The name "NachtWal" is first mentioned in The MOVIE 2nd A's adaptation, wherein its material forms are depicted. Defense System (防御システム Bōgyo Shisutemu) is also used occasionally in the movie.

NachtWal's Eroded Form is more commonly known as the Darkness of the Book of Darkness (闇の書の闇 Yami no Sho no Yami) in both continuities.

After Hayate reprograms the Book of Darkness, it is separated from the other components and turned into its Eroded Form, which has a composite (magical and physical) four-layer barrier to block most attacks from reaching its body.

After subjecting the Eroded Form to various powerful attacks that destroy most of its defenses and body parts, Nanoha and Hayate's group manage to expose its core, which is located and captured by Shamal's Mirror of Travels, teleported into the outer space, and destroyed by an Arc-en-ciel blast from Arthra.

The Defense Program also appears briefly in a flashback in the final chapter of A's manga.

In The Battle of Aces, the Defense Program's Eroded Form makes a brief cameo appearance in the flashback of what happened in A's (ep.12). In the Portable Universe not only is the Defense Program's Linker Core destroyed but the data pertaining to the Defense System including the Book of Darkness's Core Unit is ripped out as well dooming the Book's Master Control Program Reinforce to degradation and later sleep.

Additionally, the Dark Fragments and Materials are said to be components of the "reviving" Defense Program(with Dearche being the Core Unit of the Book of Darkness and the Defense Program which was responsible for the lockdown on the Wolkenritter's actions whenever their knowledge threatened the completion of the Book of Darkness). Finally the System U-D is revealed to be the source of the Defense System's rampages.

Additionally in the spin-off manga The Gears of Destiny: Material Girls., an unknown female horned animal (known as "wing-fox" in INNOCENT: Material Girls.) appears in front of Yuri Eberwein one night. She is wary of Hayate Yagami and the Wolkenritter, but friendly to Reinforce, who names her Nacht (なはと Nahato). In one of the bound volume postscripts, it is stated that she is a fox-shaped hybrid creature of Examia energy and Book of Darkness program, and her existence is a result of the Florian sisters' time-warp impact on NachtWal.

NachtWal has the "desire" to complete the Book of Darkness and to (let its master) use its collected powers. Hence it does not mind sacrifices (e.g. absorbing the Wolkenritter), as long as the Book itself can subsist.[1]

During the fight between the mages and the knights at the hospital rooftop, NachtWal is automatically activated and manifests itself. Prioritizing the completion of the Book, it gives up the maintenance of and eliminates the Wolkenritter system by absorbing all mana from their Linker Cores, leaving their bodies hanged. It then forces Hayate to awake, and further misinterprets her request by erasing the Wolkenritter system (i.e. destroying their bodies) and returning to her the knights in core mode.

When Hayate is awakening, it sends the Master Program's core to unison with her. It later turns into its (Equipment Form and then) Armament Form upon the request of the Unison Device. During the fight between the Unison Device and the mages, however, it starts to go berserk, and Hayate asks for the mages' help to separate NachtWal from the Unison Device, which is achieved by Nanoha's and Fate's joint attack Blast Calamity.

After Hayate reprograms the Book of Darkness, the events proceed similar to the primary continuity, except for minor changes in its number of barrier layers (from four to two) and new Laminated Defense.

It is further explained that the recovery/regeneration function of the Defense System has a complicated connection with Reinforce's frame, and they are linked to an inseparable level that Reinforce cannot continue to exist if they are separated.[2] Because of this, Reinforce suggests to fully destruct herself and the Book. She can actually do it with her own mana and will, but she performs an additional ceremony, as represented by the magic circles, in order to prevent the residue of the Defense System from spilling out (c/w Dark Fragments Incident in the portable continuity).[3]

Unintentionally (as Reinforce was trying to take out the entire Defense System rather than it's System Recovery) the Self Destruct spell only destroys the System Recovery, the Book's data of System U-D and Reinforce herself later allowing Iris to recover the Defense System's Core(which is also the Core Unit of the Book) and it's other Materials in order to locate the fragment of U-D that lingered in the ocean following the destruction of Nachtwal's physical body. It's explained later at Detonation, that during the fight against NachtWal, one of the page that contains System U-D was lost on the sea and transformed into a crystal without noticing.

NachtWal, also nicknamed Nacht, is one of the Brave Duel Devices used by Reinforce Eins Yagami when she is in her Night Raider avatar. Only the Armament Form from The MOVIE 2nd A's is adopted as one of its Brave Duel forms, while the other Brave Duel forms are originally designed.

The Defense Program (of the Tome of the Night Sky) was originally a system to protect the "Master of the Night Sky" and the Tome (i.e. the Unison Device[4]), as well as to back up valuable collected data for repair in case of damage. However, some of the Tome's masters in Ancient Belkan era had misguidedly "improved" it to a level of high regeneration ability that can recover the Tome even when it is completely destroyed. This marked the first step of the Tome's corruption into the Book of Darkness.[5]

Due to the program changes, its defensive and autonomous action functions eventually malfunctioned, causing it to go berserk soon after the completion of the Book's pages. However, if the Unison Device effectively exercises control over it (to protect the master on her own), NachtWal can be used as a strong arm armament.[4]

In The MOVIE 2nd A's, certain spells are cast by NachtWal directly or due to its mana-berserk.

In addition, it has generated barriers to protect Vita from Nanoha Takamachi's Divine Buster Extension upon its activation and to defend against Zafira's attack; and used a chrysalis-like cage to imprison Nanoha and Fate. In its Eroded Form, it also uses multi-layer barriers. 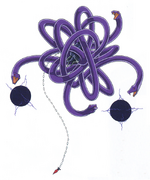 Retrieved from "https://nanoha.fandom.com/wiki/NachtWal?oldid=32958"
Community content is available under CC-BY-SA unless otherwise noted.