Quattro (クアットロ Kuattoro) is a Number and comes after Uno, Due, Tre and Cinque regarding the length of her period on active status. In spite of the fact that she was originally created as an intelligence processing-type to support Uno, Quattro was eventually upgraded with illusionist and ECM capabilities at some point during her ten years of service to boost her potential as a rear commander. She possesses great evasion skills thanks to being flight-capable and her Inherent Equipment, Silver Cape, provide her with stealth and anti-magic defensive measures.

Similar to other Numbers, Quattro's name means "4" (her index, even though she was activated after Cinque) in Italian. It may also double as a reference to the Audi Quattro.

Intelligent and highly capable of independent thinking, she uses whatever means she believes necessary to achieve her goals. Still, she has a somewhat playful attitude towards her job that makes her personality similar to Jail Scaglietti's. Also, like Due and Tre, Quattro's genetic material contains some genes of her creator himself. She always puts on an act when near her sisters, always controlling her own words and actions, as she apparently has a side that she doesn't wish them to see.[1] Quattro differs a lot from her sisters when it comes to her own personal opinions, especially those regarding Lutecia. Overall, Quattro is extremely similar to Scaglietti, especially when she stops hiding her true personality near the end of StrikerS.

In a famous scene near the end of StrikerS, Quattro is shot by Nanoha Takamachi's Divine Buster across the entire Saint's Cradle in the middle of her fight against Vivio, whom Quattro was manipulating. In the credits of StrikerS, Quattro is shown in a cell, indicating that she decided not to join the Time-Space Administration Bureau but instead opted to remain loyal to Jail.

She is currently imprisoned in the Gerda (ゲルダ Geruda) orbital prison facility over the Uninhabited World #6.[2] 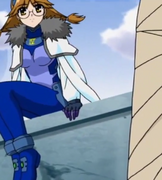 Retrieved from "https://nanoha.fandom.com/wiki/Quattro?oldid=34010"
Community content is available under CC-BY-SA unless otherwise noted.