Presumably, Reinforce was named after a battleship from Victory Gundam, which was destroyed and rebuilt as the smaller "Reinforce Jr.".

Prior to the reprogramming by Hayate, the nameless Master Program is referred to as "the Will of the Book of Darkness" (闇の書の意志 Yami no Sho no Ishi). When she takes over Hayate in a Reverse Unison, Nanoha Takamachi has called her Ms. Book of Darkness (闇の書さん Yami no Sho san). She also addresses herself as "the Tome" in The MOVIE 2nd A's.

Upon reprogramming, in addition to giving her a new name, Hayate also titles her as "the Blessed Wind" (祝福の風 Shukufuku no Kaze).

In Reinforce's scenario in The Battle of Aces, she refers to herself for the first time as "Eins" ( Ainsu, German for "one"), urging Hayate to reserve the name "Reinforce" for her future Device, foreshadowing the naming of Reinforce Zwei. Since then, Vita and Hayate have also referred to her as Eins ( Ainsu, lit. "first generation") in ViVid ch.ex and Force ch.18 respectively. In the 12th TVCM of The MOVIE 2nd A's (a cross-continuity ad), Reinforce also introduces herself as "Reinforce Eins" (リインフォースⅠ Ri'infōsu Ainsu).

Reinforce appears, simply as the "Book of Darkness", in the A's manga. Although she cannot communicate with her master, she can control the Book to float around her house and interact with Hayate physically in a manner reminiscent of a pet. Her inner monologue, however, reveals that she is fully aware of herself and their situation but cannot manifest herself in any other way until her pages are filled up.

Hayate, once placed inside a void in the Book's separate dimension, opens her eyes after presumably being asleep, but the Book tells her to go back to sleep and escape the tragic reality. She refuses, and instead absorbs the knowledge of the Book of Darkness, gaining greater control over it and learning of everything that has been going on behind her back, including the innocence of Nanoha Takamachi and Fate Testarossa including more of the sadness of the Wolkenritter. Just as the Book has Nanoha cornered, Hayate takes control of her body again so that Nanoha can disable it. During this process, Hayate gives the Device a new name, "Reinforce".

Hayate reprograms the entire Device, but something still remains inside that wants to continue its former programming. She identifies it as a corrupted automated defense program and says that it caused the evil aspect of the Book. Reinforce frees Hayate and becomes her partner. The reprogrammed Unison Device comprises Reinforce the Master Program, the Book and the Staff. (See Book of Darkness for more information.)

The characters involved in the incident from both the Administrative Bureau meet up with the Wolkenritter, who are then reformed by Hayate. Reinforce and Hayate perform a Unison, and the group teams up to defeat the viral creature.

In the aftermath of the battle, Reinforce believes that she has to be destroyed for the virus never to return, and convinces Nanoha and Fate to do so. Hayate, however refuses to let her go. After persuading Hayate to her side, Reinforce asks her one request: to preserve the title of "the Blessed Wind" for the new container in the future, stating that she will always be with Hayate through the Knights and the new container. Reinforce then self-destructs, with only the Schwertkreuz-like fragment left over.

Reinforce makes a cameo appearance in a flashback in the final chapter of A's manga, when Nanoha suggests that her personality has melded with Hayate's.

In an epilogue that bridges the gap between A's and StrikerS, Reinforce is revealed to have been the main inspiration for Reinforce Zwei. She is much smaller than her predecessor but still allows the normal functions of a Unison Device.

Reinforce (as the will of the Book of Darkness) only appears briefly in the prologue of Force, in a flashback of the Ancient Belkan era.

Reinforce mainly appears in The MOVIE 2nd A's and briefly in Detonation. During the roadshow of Reflection, Reinforce also makes a cameo appearance in the fourth bonus weekly movie at the end, having a conversation with Yuri therein.

In The MOVIE 2nd A's, she is not referred to as the Master Program of the Book of Darkness, but instead appears as a regular Unison Device. She seems to retain complete consciousness, rather than being driven by NachtWal, i.e. the Defense Program. In fact, she also equips it on her left arm as a weapon when she can still exercise control over it.

Reinforce appears as a playable character in both Battle of Aces and Gears of Destiny. In fact, the point of divergence of this continuity is the refusal of Nanoha and Fate to help destructing her (as they do in A's ep.13), so they instead continue to battle the residue of the Book of Darkness (i.e Dark Fragments) to let Reinforce stay with Hayate for a longer time.

Like the Wolkenritter and many other mages, she is capable of flight and telepathy. Her magic color is black with purplish aura and becomes Hayate's white color when performing the self-destruction magic by the end of A's. However, it does not change but remains purplish black in the portable continuity.

Her magical ability is area-of-effect attack, which even enables her to re-arrange spells for wider area effect. She also possesses the Rare Skill Use of Collection and hence has access to all spells stored in the Book of Darkness through Linker Core absorption. Such spells generally use their original casters' magic circle and magic color, despite the magic color may change to hers when she cast a re-arranged variation (e.g. Photon Lancer Genocide Shift). Notably, when casting Nanoha's Starlight Breaker, she adds an aria to the spell which Nanoha has never been seen to use.

Reinforce does not cast Knight Armor but Battle Clothing as her protective clothing.[1] Its undersuit takes the form of a plain black minidress with a gold band around her waist, two more crossing over her chest, and a red belt around her neck. She wears fingerless gloves, and armoured black boots with socks of two different lengths. The same black minidress is worn by Signum as non-combat attire before she receives casual clothes from Hayate. In combat, she adds a black jacket and a black skirt with gold trim similar to Signum's Knight Clothing, along with two pairs of raven-like wings from Sleipnir spell.

While under the influence of the corrupted Defense Program before reprogramming, she has red lines on her skin, a small pair of wings on her head, and red cords wrapped around her right arm and the exposed skin on her legs. The first two traits are shown by the Defense Program itself when it is separated from Reinforce.

Exclusively in The MOVIE 2nd A's, Reinforce casts Knight Clothing after being reprogrammed. Its design conforms to Hayate's Knight Armor, which is also set by Reinforce.[2] 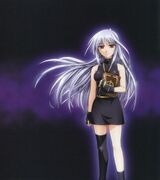