S2U (Ｓ２Ｕ Esu Tsū Yū)[1] is a Storage Device used by Chrono Harlaown before he acquires Durandal in A's.

S2U is named for "Song To You" from Lyrical Toy Box.

In the portable continuity, both S2U and Durandal are wielded by Chrono, making him a multi-Device user other than Hayate Yagami.

In the movie continuity, S2U appears in The MOVIE 1st and The MOVIE 2nd A's, with no notable change in its designs.

As a Storage Device, S2U has a higher processing speed than an Intelligent Device like Raising Heart and Bardiche, but is unable to advise its master on which spells to cast in a particular situation. 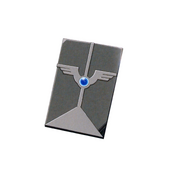