Vivio additionally gives Sacred Heart a "mascot name", which she uses most of the time: Chris (クリス Kurisu).

It also makes brief or cameo appearances alongside its master in The Gears of Destiny and Force.[2]

Sacred Heart appears as a plush bunny that floats in the air to follow Vivio, with appearance similar to the plush bunny that Nanoha gave to Vivio in StrikerS. The bunny is actually an overcoat, its substance is an ordinary crystal like other devices.

When activated (its trigger is "Sacred Heart! Set up!"), it does not change its physical appearance, and grants Vivio stronger magical power and control, and can let her maintain the Adult Mode.

No matter in Adult Mode or not, Sacred Heart may be absorbed into Vivio's body for better control, especially when entering the following alternative forms: 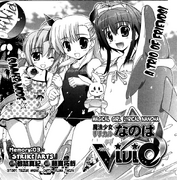 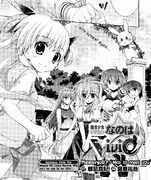 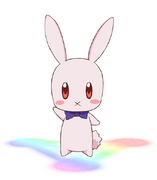 Retrieved from "https://nanoha.fandom.com/wiki/Sacred_Heart?oldid=30516"
Community content is available under CC-BY-SA unless otherwise noted.