Schwertkreuz (シュベルトクロイツ Shuberutokuroitsu) is the Armed Device used by Hayate Yagami in the end of A's.

It is also the Armed Device recreated post-A's based on the design of the original one, and used by Hayate in the subsequent series.

It is merely referred to as the "staff" in A's, while its name Schwertkreuz is made known in the Visual Fan Book and DVD Booklet. It is also known as the "Staff of the Sword Cross" (剣十字の杖 Kenjūji no Tsue) and the "Knight Staff" (騎士杖 Kishi Jō),

The original Schwertkreuz appears in A's (ep.11-12) when Hayate sets up Reinforce for the first time. It is presumably destroyed along with Reinforce in A's (ep.13), as it has been revealed in an interview[1] and in the DVD supplemental materials that the Schwertkreuz in StrikerS is not the staff used by Hayate in A's, even though they share the same name.

The recreated Schwertkreuz, which Hayate uses in StrikerS manga, StrikerS, ViVid and Force, first appears in A's manga (ch.7), in which Amy Limietta refers to it as "version 8".[2] Afterwards, version updates are performed from time to time by Mariel Atenza, who is also the creator of this Device, to better tune its control over Hayate's enormous mana.[3] Its anime debut takes place in A's epilogue, where it appears in its standby form only.

In the movie continuity, Schwertkreuz appears in The MOVIE 2nd A's and Reflection.

As a non-personified Armed Device, Schwertkreuz has neither an AI, nor the ability of magic control and storage. This is because the said functions are carried out by Reinforce/Reinforce Zwei and the Tome of the Night Sky respectively, while Schwertkreuz itself is limited to mana-related functions like charge-acceleration and compression. 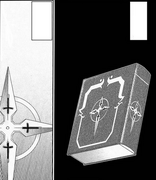 Retrieved from "https://nanoha.fandom.com/wiki/Schwertkreuz?oldid=31177"
Community content is available under CC-BY-SA unless otherwise noted.