Nanoha Takamachi, Arisa Bunnings and Suzuka Tsukimura attend its 3rd grade in the original series (in 0065). From A's onward, Fate Testarossa enrols in Seishou Elementary School as well. It is also mentioned that had Hayate Yagami not suffered from a debilitating decease, she would have attended it, too. After the Book of Darkness Incident and a period of rehab, Hayate enrols in the same grade of Nanoha and Fate.

The schoolgirl uniform of Seishou is the prototype of Nanoha's initial Barrier Jacket, some elements of which are retained in all subsequent variations or upgrades.

Seishou Elementary School, as seen in The MOVIE 1st 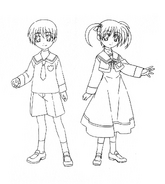 Male and female school uniforms
Add a photo to this gallery

Retrieved from "https://nanoha.fandom.com/wiki/Seishou_Elementary_School?oldid=30644"
Community content is available under CC-BY-SA unless otherwise noted.