Sette (セッテ Sette) is, along with Otto and Deed, one of the last Numbers to be completed. She appears in both StrikerS and StrikerS manga.

Sette's appearance is modeled on Mylene Flare Jenius from Macross 7.

Out of all the Numbers, Sette has the most emotionless and machine-like personality. This is believed to be the result of manipulation carried out by Quattro upon the final batch of Numbers to remove "excess elements" from their composition.[1]

Sette possesses outstanding fighting capacities, proven by the fact that she helped Tre take down an army of TSAB Air Forces' mages during her first real-life combat experience. She was tutored by Tre, who gave her a strict and severe training. Because of that, Sette has great respect for her older sister and even shares some of her personality traits.

Sette‘s defeated and captured by Fate T. Harlaown while defending Scaglietti alongside Tre. In the StrikerS epilogue, she is shown as only late generation Number kept at the high-security facility, namely in the Labsorum (ラブソウルム Rabusōrumu) orbital prison facility over the Uninhabited World #17.[2] However, this was probably due to her loyalty to Tre rather than to the Doctor.

Nanao Scaglietti (七緒・スカリエッティ Nanao Sukarietti), being Sette re-designed as a girl studying 2nd grade (approx. 7 years old) that does not appear in other continuities, is the fifth and the youngest daughter of Jail Scaglietti. "Nana" means "seven" in Japanese, just as "Sette" means "seven" in Italian. 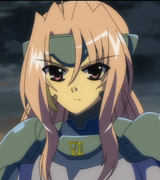 Retrieved from "https://nanoha.fandom.com/wiki/Sette?oldid=33538"
Community content is available under CC-BY-SA unless otherwise noted.