Suzuka Tsukimura (月村すずか Tsukimura Suzuka) is the daughter of Shun Tsukimura and Haruna Tsukimura, the younger sister of Shinobu Tsukimura and one of Nanoha Takamachi's best friends at Seishou Elementary School, along with Arisa Bunnings.

During the Book of Darkness Incident, she also befriends Hayate Yagami, the Book's current master, and unwittingly escalates the conflict between Hayate's protectors, the Wolkenritter, and the Administrative Bureau, for which Nanoha then works.

Suzuka is a extremely gentle, quiet and caring girl.

Suzuka is a grade three student in the same class as Nanoha Takamachi and Arisa Bunnings where she is already sure what she wants to do with her life: continue on her family tradition of rich, successful engineers. She lives in a huge mansion with Noel K. Ehrlichkeit and Farin K. Ehrlichkeit (Suzuka's maids), Shinobu Tsukimura (Suzuka's older sister) and many cats, one of which is affected by a Jewel Seed. As a small child, she was bullied by the more aggressive Arisa, but Nanoha stood up to Arisa and the trio became friends. When Arisa strikes out at Nanoha and stops speaking to her because she can tell that Nanoha has been keeping secrets, Suzuka stays with Arisa and slowly but eventually changes the other girl's mind so they reconcile again.

In A's, Suzuka befriends Hayate Yagami when she helps the wheelchair-bound girl reach a library book. She greets transfer student Fate Testarossa happily, as well as the return of cute "pet" Yuuno, and continues in her complete ignorance of the magical situation until late in the series. Suzuka and Arisa are trapped in a magical barrier and bear witness to Nanoha and Fate's battle with Hayate possessed by the Book of Darkness. Later, Suzuka, along with the other civilian characters, are let in on the secrets of what Nanoha has been doing all this time.

In A's manga, it is revealed that Suzuka's physical condition borders the superhuman, when she returns a high-speed volleyball back to Fate during a dodgeball match, knocking her out. This is likely a shout-out to Triangle Heart 3 where Suzuka's family are vampires.

In A's epilogue, Suzuka still goes to school with Nanoha and Arisa and remains their close friend.

Suzuka appear briefly in a three-minute music video-style movie of ~Lyrical Toy Box~ alongside with her maid Farin. Like her sister Shinobu, Suzuka is a vampire in this continuity.

Suzuka appears in The MOVIE 1st, The MOVIE 2nd A's, Reflection and Detonation.

Suzuka Tsukimura is an elementary school student of Private Kaisei Elementary School. She is a Midchilda-style duelist of T&H Elements team and her primary avatar is Professor type, which is good at using supportive and detection skills, with bluish purple (unnamed) color theme, specializing in ice. Her Brave Duel Device is Snow White and her "magic color" is violet. 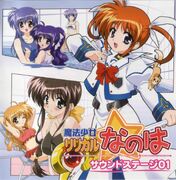 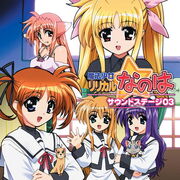 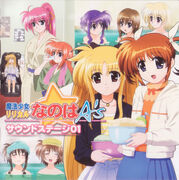