Teana Lanster (ティアナ・ランスター Tiana Ransutā) is a young operative of the Administrative Bureau Ground Forces first introduced in Magical Girl Lyrical Nanoha StrikerS. A close friend of Subaru Nakajima and a student of Nanoha Takamachi, Teana quickly becomes the leader of the Riot Force 6 Forwards and enjoys a meteoric career rise after StrikerS, despite her unremarkable natural aptitude for magic. She eventually joins the Bureau's Executive Officer corps after a few years under the tutelage of Fate T. Harlaown.

Teana is presumably named after the Nissan Teana. This spelling is believed to be official, as it is also used by StrikerS website and publications. However, her name is misspelled as "Tiana Lanceter" in StrikerS opening theme one. "Tiana" also appears at least in one instance on a computer screen.[citation needed]

Subaru's nickname for her is Tea (ティア Tia), sometimes romanized as "Tia" to indicate the pronunciation. Erio Mondial and Caro Ru Lushe also follow and call her Tea-san.

Teana is initially somewhat insecure and desperate to prove herself as a mage so that she can show that her family's style of magic is worthwhile, especially in comparison to the powerful members of Riot Force Six. She is often fairly blunt and has difficulty opening up to others, but is close to the friends she has. Around her best friend, Subaru, Teana is typically somewhat irritable, and disliked her before learning more about her. She holds Subaru in high regard and is grateful that she is her friend, but because Subaru would find it strange for her to openly admit it, she does not tell her.

Teana's parents passed away when she was at a very young age, so her older brother and only sibling, Tiida Lanster, took care of her afterwards. Unfortunately, when Teana became ten in age, her brother was involved with a crime case that had cold-hearted superiors leading said case. Injuring but failing to capture the wanted mage, he was ridiculed by aforementioned superiors of being 'useless and a failure' because he is 'supposed to risk his life, even sacrifice it, to make the mission a success'. Having a brother that was shamed from his final mission to his death, Teana made a goal to prove it to everyone that the bullets of the Lansters are not to be taken lightly. Because of this, her dream is to be an enforcer, just like her brother.

In the manga, Teana is first introduced enrolling into the academy, after having previously dropped out of air combat training, failing to join the Capital Air Force (Tiida's old unit), and is assigned as Subaru's partner because the two are the only ones with custom devices. She becomes irritated when Subaru makes mistakes that get them in trouble with their instructor by starting prematurely and accidentally throwing her over a wall instead of giving her a boost, and claims that Subaru is not taking things seriously. She tells Subaru that she does not wish to be friends, but Subaru persists and the two come to work well as a team. When Teana meets Ginga and learns about Subaru's past, she starts liking her more and begins calling her by her first name, albeit claiming that it's to keep her and Ginga separate. Both Teana and Subaru graduate from the academy at the top of their class and pass the D and C mage rank exams at their first attempt.[3] Following their graduation, they join the Ground Forces (disaster relief operations) and are repeatedly paired together due to their complementary skills.[3]

Teana joins Riot Force Six, albeit worrying that she is normal compared to many of the members there. Despite succeeding in the missions on the train and one on Earth in the first sound stage, she feels inadequate. When several Gadget Drones are summoned nearby, she goes against orders to hold the line and goes on the offensive, nearly hitting Subaru. Feeling depressed over her failure, she trains harder than ever, and forms a risky strategy to defeat Nanoha in the next mock battle. The strategy fails and when Teana attacks Nanoha afterward, she is knocked unconscious. Teana then learns about how Nanoha's overexertion resulted in her being injured and almost crippled, and after Nanoha tells her of her plan to have her make the most of what she has, she apologizes. Despite their misunderstanding, Nanoha has always had the greatest expectations of Teana, having planned to put her in charge of the other Forwards from a very early stage.[4]

Teana's effectiveness in battle improves when she starts using her illusion magic. Over time, Teana forms a strong friendship with a fellow sharp shooter Vice Granscenic. During the invasion of Riot Force Six, Teana's illusions enable the Forwards to escape their Combat Cyborg attackers. During the final battle, she defeats Nove, Wendi and Deed, and tells Nove that even if she was created as a weapon, Subaru shows that people like her can live as kind individuals. Subaru and Teana then help rescue Nanoha, Hayate, Reinforce Zwei and Vivio from the Cradle before the TSAB fleet destroys it.

After the JS Incident, Nanoha teaches her Starlight Breaker during her last days in Riot Force 6. At the end of the series (April 0076), Teana starts to work and train as Executive Officer Assistant to Fate T. Harlaown (second aide) under Administrative Bureau Main Office.

Two years later, Teana is now an independent Executive Officer with equivalent armed force rank of 3rd Captain.[5] She is the one in charge of investigating the Mariage incident regarding Ancient Belka artifacts awakening, which is the premise of the plot. She is working with her Executive Officer Assistant Runessa Magnus on the case, and hopes to make this a permanent partnership. However, she learns that Runessa is the true mastermind behind the incident, and arrests her at the end. During the Mariage incident, Teana uses Starlight Breaker after Subaru meets Ixpellia, in order to give the two a path to escape with.

Teana first appears in chapter 5 of ViVid and introduces herself to Einhard Stratos as the best friend of Subaru, whose apartment Einhard was brought to after passing out on the street. After confirming that Einhart is not planning to hurt Vivio or Ixpellia, she accompanies her and Nove to the police station but stays behind to chat with Subaru. She is last seen seeing Einhard off to school, where she is supposed to meet Vivio.

She next appears in chapter 8, working in her office with Cross Mirage until the last moment, before going on a trip to Carnaaji, with Subaru, Nanoha, Vivio, and her friends. In chapter 10, she, Subaru, Nanoha, Fate, Caro, and Erio participate in a spectacular mock battle.

In the team training battle on the second day in Carnaaji, Teana takes the Center Guard position of the Red Team, opposing Nanoha. Toward the end of the duel, she and Nanoha fire Starlight Breakers at each other, defeating most of their opponents in the process. Teana barely survives and remains mobile, but Vivio attacks her, and Einhard arrives too late to prevent her from being knocked out. Two more matches happen; one with her opposing Nanoha again (1 on 1), and one with the two on the same team.

Teana only appears briefly in a lunch gathering with the Nakajima sisters, Einhard and Fuka Reventon in ViVid Strike! (ep.3.5, bonus manga).

Teana first appears in the prologue chapter of Force, meeting with Fate and Shario Finieno and discussing their future cooperation. In chapter 1, all three of them participate in a confiscation of smuggled goods in St. Valerie Airport on Fedikia, searching for the Bible of Silver Cross and a Divider, but to no avail. She is next seen on Easter, talking with the witnesses of an attack that destroyed their village. The witness confirms that the two attackers wielded the Book and the Divider, making Teana conclude that the perpetrator must have been an Eclipse carrier. One of her aides suggests a link to the Hückebein family and Teana sets off to investigate it.

As of chapter 3, Teana is still on Easter and appears briefly to receive a report from Agito on Ruwella. In chapter 4, a photograph where she is seen together with Subaru and Touma suggests that she personally knows him.

In chapter 7, Teana is transferred to Ruwella to assist Signum, who has engaged Cypha of Hückebein in battle. By chapter 8, she is seen riding together with Fate on a car, presumably headed to the scene of the transpired event, but she is nowhere to be seen during the ensuing battle against Hückebeins.

Teana Lanster, similar to her initial appearance in the primary continuity, is Rynith Lanster's younger sister, 7 years old. She is Subaru Nakajima's friend, Teana is joining the Brave Duel along with Subaru.

Teana is a user of the Midchildan magic system and a telepath. Being proficient in shooting, she is assigned the position of Center Guard of the Forward Team in Riot Force 6. Teana receives an advanced Intelligent Device named Cross Mirage to replace her old Anchor Gun in the course of her training. Teana is ambidextrous,[6] which allows her to use the dual-gun mode of Cross Mirage with great efficiency. Her specialty besides shooting spells is the illusion-type magic.

Lacking effective quick transportation or flight abilities, Teana usually relies on her motorcycle to travel. She drove it on her day off with Subaru in StrikerS, as well as during the evacuation of Riot Force 6 personnel stranded on the Saint's Cradle.

In Force, she displays precision shooting with Oxtongue while standing on a speeding motorcycle (driven by Erio) to puncture the tires of the Grendel family's escape car.

The standard last defense barrier for a mage, Teana's Barrier Jacket is originally the standard Ground Force model at the beginning of StrikerS. Upon the official receipt of Cross Mirage, her Jacket is, like Subaru, changed to a design called Stars Style, based on Nanoha's Aggressor Mode (as she is Teana's commander in Forward Stars) and offering heavier armor at the cost of higher mana consumption. 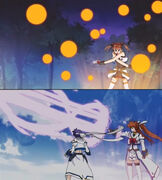 Retrieved from "https://nanoha.fandom.com/wiki/Teana_Lanster?oldid=32032"
Community content is available under CC-BY-SA unless otherwise noted.