Uno (ウーノ Ūno) is the oldest of the Numbers and has been Jail Scaglietti's accomplice in many incidents. Her IS allows her to obtain and process data without making use of conventional means, hence being undetectable. She also received mental implants to optimize her intel management and general mental reflexes. In a battle her role is similar to that of an AWACS unit, taking charge of the communication between units and data gathering.

Uno is, in fact, an opposite gender clone of Scaglietti himself, with additional cyborg modifications. As such, she holds a special position among the Numbers, reflected, among other things, in her wearing casual clothing (whereas everyone else has to wear specialized cyborg combat gear). She is also the first Number ever to be created and Scaglietti's personal secretary. With a calm and collected personality, acting for Scaglietti's benefit is always her utmost priority. Uno is greatly respected by her sisters due to her seniority and none of them will disobey a direct order from her. She is the one who understand Scaglietti the most and will always support him in both actions and thoughts.

In StrikerS (ep.24), she is eventually discovered and captured by Verossa Acous, who then proceeds to extract intel about the other Numbers from her mind. After the JS Incident, Uno refuses to enter rehab program like most younger Numbers, and is then imprisoned in the Labsorum (ラブソウルム Rabusōrumu) orbital prison facility over the Uninhabited World #17, along with Sette.[1]

Uno appears in the INNOCENT media as Ichika Scaglietti. "Ichi" means "one" in Japanese, just as "Uno" means "one" in Italian. She also uses the name "Uno Scaglietti" when dressed up in secretary avatar in Brave Duel games. 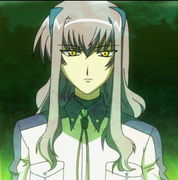 Retrieved from "https://nanoha.fandom.com/wiki/Uno?oldid=34050"
Community content is available under CC-BY-SA unless otherwise noted.