Vivio (ヴィヴィオ Vivio) is a mysterious young girl sought after by Dr. Jail Scaglietti in Magical Girl Lyrical Nanoha StrikerS. She turns out to be a clone of Saint King Olivie Sägebrecht created by Scaglietti, as she is intended to be a vessel for The Saint's Cradle.

She is also the heroine in Magical Girl Lyrical Nanoha ViVid.

Her name is presumably a reference to the Subaru Vivio. It is officially changed to Vivio Takamachi[4] (高町ヴィヴィオ Takamachi Vivio) after she is adopted by Nanoha Takamachi in the end of StrikerS.

Notably, her first name is sometimes spelled as ViVio,[5] of which the capitalization is same as the series name "ViVid" as well as "ViVi", the nickname of her original Olivie.

Due to her bloodline, she is addressed as Her Majesty (陛下 heika) by certain members of the Saint Church. She is also nicknamed Vivi (by Viktoria Dahlgrun and Fabia Crozelg), e.g. Vivi-chan (by Sieglinde Eremiah), Vivi-san (by Fuka Reventon).

Vivio is a young blonde girl with a complete heterochromia, her right eye being green and her left one, red.

Vivio was a bit childish and somewhat of a crybaby initially, but later becomes more cheerful, lively, optimistic and very close to her mothers Nanoha and Fate.

Vivio was artificially created by Jail Scaglietti using the genetic material of a long-dead Saint King of Ancient Belka, Olivie Sägebrecht,[6] to serve as his key to The Saint's Cradle. However, she manages to escape with a Relic and is discovered by Caro Ru Lushe and Erio Mondial in StrikerS (ep.10).

Vivio is then taken to the Saint Church for observation and protection, and later to the dormitory of Riot Force 6 under the care of Nanoha, Fate and matron Aina Triton. When Nanoha has taken her in as her own daughter, Fate offers to be a godmother, so Vivio refers to both of them as "mama". Nanoha tends to be strict with her, while Fate tends to spoil her, giving both "mamas" a little role reversal personality-wise.

During the JS Incident, the Riot Force 6 HQ is attacked and the Numbers recapture Vivio. Scaglietti proceeds to gain control over the Cradle using Vivio, then pits her against Nanoha by infusing her with a Relic. As a side effect, Vivio is shapeshifted to her Heiliger Kaiser Mode (聖王モード Seiō Mōdo), gaining the appearance of someone of Nanoha's own age. By subjecting her to what is probably her single most powerful attack in the entire series, Nanoha eventually manages to break the infused Relic, freeing Vivio from Scaglietti's control and reverting her back to a child.

In StrikerS epilogue, when Riot Force 6 is already disbanded after one year of operation, Vivio has already been adopted by Nanoha officially and studies at the St. Hilde Academy of Magic. Aina has also changed her job from the Force's matron to the homekeeper of the Takamachi residence to take care of Vivio.

Vivio has a minor role in Sound Stage X, wherein she assists Teana Lanster's investigation by researching the Mariage at the Infinity Library. After the Mariage Incident is closed, Vivio has befriended Ixveria.

By the time of 0079, Vivio is shown living normally with Nanoha and attending the St. Hilde Academy of Magic with her friends, Corona Timil and Rio Wesley. In the first chapter when Vivio starts her fourth grade, Nanoha presents Vivio with a new Device whom she names Sacred Heart, much to Nanoha's surprise. Vivio has also learned to enter the Adult Mode at will (which greatly unnerves Fate when she first sees it), but has promised Nanoha to only use it for magical training.[7]

Vivio is seen again at the end of chapter 5, when Nove Nakajima asks her to research the history of Shutra and to practice martial arts with Einhard Stratos. In chapter 5, Einhard immediately acknowledges her as a Saint King and a worthy opponent to herself but breaks off the fight, when she believes Vivio is not taking it seriously enough. Blaming herself for disappointing Einhard, Vivio proposes a rematch in a week and throws herself into intensive training, resolved to support Einhard in whatever she is trying to achieve. During the rematch, she nonchalantly admits that she will probably lose again but nevertheless fights at full strength, summoning images of Nanoha and Fate as inspiration. Although Einhard eventually knocks her out, the fight changes her opinion about Vivio. Vivio is last seen still unconscious, being carried to a place to rest by Einhard.

In chapter 8, which takes place some time after their rematch, Vivio is eager to get to know Einhard, both interested in her and because of their shared Ancient Belkan royal heritage. However, because of their age difference, there is still distance between them. When Nanoha and Fate organize a trip to Carnaaji, Vivio is the last to learn that Nove secretly invited Einhard with them and her delighted surprise embarrasses Einhard a lot. On the trip, she and her friends teach Einhard the "water cutting", for which she shows much aptitude, so they exhaust each other in a friendly competition. After lunch, Vivio explains to Einhard how she was trained first by Subaru, then by Nove, prompting Einhard to admit she is a little jealous. Vivio then comforts her that she is not alone anymore.

In chapter 10, Vivio asks Einhard about her memories from the Ancient Belkan era, particularly interested in Saint King Olivie. However, the memories are rather sad and Einhard breaks off, believing she has upset Vivio. Soon thereafter, Nove finds them and calls to watch over a mock battle between the former Riot Force 6 aces, while Vivio explains their background to Einhard. She then telepathically asks Einhard if she wants to train, too, and the two of them run off into the forest to practice glove hitting, which Einhard finds useful, much to Vivio's joy.

Later, Vivio participates in the 0079 DSAA Intermiddle Championship. She is knocked out by Miura Rinaldi in her third battle.

In episode 1, Vivio knocks down Fuka Reventon in their spar. In a subsequent re-match, she attacks Fuka with Accel Smash W, but before Fuka is judged as K.O., she is also ringed out and down after assuming Fuka's Hegemon Sky-severing Knuckle.

In episodes 7 to 8, Vivio faces off Rinne Berlinetta in the 0080 Winter Cup tournament of U15 Striker Championship. She knocks down Rinne in the first round. In the second round, Vivio seems to have the upper hand, and the round ends with Vivio gaining more points. By the third round, Rinne has memorized Vivio's attacking tracks and counters, and finally manages to deliver certain powerful hits, knocking down Vivio and breaking her left leg. Despite her injury, Vivio continues to fight and later switches her stance with another leg, making Rinne unable to read her movements again. Vivio then uses Accel Smash Infinity (for the first time ever in a public match, as noted by other members of Nakajima Gym) and completely overpowers Rinne, resulting in her losing both consciousness and the match. Despite her victory, however, Vivio has to drop out of the Winter Cup tournament too, due to her broken leg.

Vivio only makes minor appearances in Force. She first appears in the prologue chapter, seeing Nanoha off. In chapter 17, she is mentioned, together with Einhard Stratos, by Thoma Avenir.

In chapter 20, Vivio makes her first formal appearance, in middle school uniform, when she visits the Special Duty Section 6 headquarters. When watching the mock battle, Shamal jokingly asks if Vivio would like to join it, and although she and Chris would like to, Nanoha tells her not to interrupt the training.

Vivio only appears in Gears of Destiny. After Team Nakajima participated in the 0079 Intermiddle Championship, she and Einhard time-travel back to 13 years ago (0066) because of Kyrie Florian's time paradox.

Vivio Takamachi, similar to her appearance in the primary continuity (particularly her elementary school student image in ViVid), is Nanoha Takamachi's daughter from the future.

Genetically, Vivio is the last in the line of Heiliger Kaisers of Ancient Belka, meaning that her physical and magical capacity is superior to most modern mages. In StrikerS, she is able to go toe-to-toe with Nanoha herself after her body is powered with a Relic and forcibly aged to its peak condition. She is shown to have flight abilities and her attacks are very powerful, as her punches were strong enough to shake the Saint's Cradle. She also then possesses the Saint's Armor, which provides her a powerful AMF to protect her from incoming magic attacks. Her defense alongside with her powerful physical strength allow her to break Nanoha's binds with raw power. After the JS Incident, Vivio apparently begins to learn magic from scratch at the academy.

By the time of ViVid, Vivio practises a mixed hybrid Belkan Midchildan magic system. She is also a practitioner of Strike Arts. Additionally, she has learned to replicate the effects of adult transformation, giving her an edge over most opponents of her age. According to the conversation between Chantez, Otto and Deed in ViVid (ch.19), Vivio, without the Saint's Armor, does not have strong strength and defensive power but instead possesses the magical ability of fast parallel application (高速並列運用型), which makes her suitable for center or back guard positions instead of combat positions. However, Vivio chooses to perfect her Strike Arts mainly because of her promise with Nanoha to become a strong girl, after which she can in return protect her beloved mother. Despite her lack of combat strength and defense, Vivio is very fast and has extreme reflexes, the latter being her main strength as told by Nove. As such, she possesses the fighting style of "Counter Hitter", which refers to her strategy of dodging incoming attacks and then delivering fast counter attacks on towards the opponent. To balance her lack of defense, she also learns the defensive spell Sacred Defender, a risky instant spell that tentatively sacrifices her attack power to strongly increases her defense, but it requires high reflexes and perfect timing to pull it of.

In ViVid Strike!, Vivio's Fight Style is officially Technical Hitter, while her favorite blow is flicker jab counter. She has also developed her signature Accel Smash into Accel Smash Infinity.

When in her Heiliger Kaiser Mode in StrikerS, Vivio wears a black-and-blue Barrier Jacket that combines elements of several of those worn by Riot Force 6 members, including Nanoha, Signum and Ginga Nakajima, and the Numbers.

From ViVid onwards, Vivio's Barrier Jacket (for Adult Mode only) is slightly altered from the Heiliger Kaiser Mode. Particularly, the color of her top jacket is changed from black to white. Only in ViVid (ch.58), which is also the fourth formal match between Einhard and her, Vivio chooses to set up her Barrier Jacket in black color like the Heiliger Kaiser Mode, in order to show that she is making up her mind to face the past positively, as to encourage Einhard to face her problem about the inheritance of Ingvalt's memory. 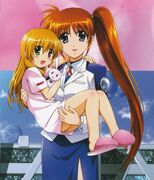