Yuri Eberwein (ユーリ・エーベルヴァイン Yūri Ēberuvain) is a character related to the Book of Darkness introduced in The Gears of Destiny.

In the portable continuity, Yuri is also titled the Successor[2] of the Purple Sky (紫天の盟主 Shiten no Meishu, lit. Leader of the Purple Sky), which comes from the Tome of the Purple Sky. When she is Unbreakable Dark (see below), she is also know as The True Darkness of the Book Of Darkness (真・闇の書の闇 Shin Yami No Sho No Yami) and also nicknamed by Hayate Yagami and later Shamal as Yami-chan (ヤミちゃん Yami chan).

Yuri only appears in The Gears of Destiny, although Unbreakable Dark (see below) has been mentioned by the Materials in The Battle of Aces.

Born in the Ancient Belkan ages, Yuri was originally a single entity. However, due to a program written with the aim of overwriting the Book of the Night Sky, Yuri was turned into Unbreakable Dark (砕け得ぬ闇 Kudake'enu Yami), aka System "Unbreakable Dark" (アンブレイカブル・ダーク Anbureikaburu Dāku) or U-D (Ｕ－Ｄ Yū Dī) and divided into multiple entities.

So uncontrollable are her powers that she and her Book of the Purple Sky were transferred into the Book of the Night Sky(which at the time was a Storage Device) causing parts of her program to segment into the Materials with Material-D which serves as the core of both the Defense Program and the Book of Darkness itself(outranking the Book's Master Control Program) segmenting further to create the Wolkenritter.

When battling Vivio Takamachi as U-D in 0066, she mistakes Vivio as the Heiliger Kaiser of the Cradle. From their conversation, it is also revealed that she knows Olivie Sägebrecht.[3]

By the end of the Unbreakable Dark Incident, Yuri eventually has her Examia overwritten by Dearche(similar to how Hayate overwrote the Book of Darkness returning it to becoming the Book of the Night Sky) and is given back the name she had before splitting into U-D and the Materials.

Yuri appears in Reflection and Detonation.

Near the end of Reflection, it is revealed by Iris (who calls Yuri a Demon) that she died during a disaster caused by Yuri decades ago, and now she is going to take revenge. When Yuri is unsealed/wakened from the Examia crystal, she is quickly mind-controlled by Iris with the virus codes before their conversion is finished, causing her to attack the Administrative Bureau mages including Fate T. Harlaown and Signum with Crystal Tree.

In Detonation, after Nanoha Takamachi comes to saved the Administrative Bureau mages with using Formula Cannon, Iris order Yuri to attack Nanoha. Thought, as Nanoha activated System Alter she is able to dodge Yuri's attack. The fight was continue until Nanoha's body get injured due to the negative effect of System Alter, Yuri then giving her a finishing blow, although Nanoha is saved by Vita, Signum and Hayate Yagami. Soon, Iris order Yuri leaves the area.

Later, after Levi fixed one of Tome of the Night Sky's page, Levi reads the information written in that page. It's revealed that Iris first meet Yuri in a small cave on Eltria during 40 years ago, Yuri tries to speak with Iris while using Belka language but she can't understand what's Yuri saying. So Yuri order the Book of Darkness to activate the translation system so she can speak the same language as Iris. Yuri introduced herself as a guardian of the Book of Darkness, her duty is to watching over the tome to prevent NachtWal goes berserk and not letting the tome to kills her master. After Yuri introduced herself, she is having a conversation with Iris. After Yuri used her ability, the laboratory members believed she is the key to revive Eltria, so they asked Yuri to stay together with them and Iris. The flashback was suddenly skipped to Yuri killed Phil Maxwell and Iris, Yuri stated that they will meet again in the future and the Book of Darkness was moved to the other planet. It's also explained that the reason why Yuri didn't shows up to stop NachtWal during Book of Darkness Incident, was because one of the page that have Yuri's guardian system was lost on the sea and transformed into a crystal during Nanoha and Hayate's group fight against NachtWal.

Soon, Iris ordered Yuri to attacks Tokyo along with the Iris Units. The three souls comes to fight against Yuri. During the fight, the three souls was slowly regained their memories and remembered that they were once a cats who lives with Yuri and Iris. After the three souls defeated Yuri and being free from Iris' control, they are glad that Yuri is free now. Suddenly, an android showed up and attacks Dearche, but Stern and Levi comes to protect her. It's revealed that android is Phil, the laboratory chief that supposed to be killed by Yuri in 40 years ago. Phil controlled Yuri and they teleport to the Tokyo Station. Dearche in Trinity Blood Form (Which received the mana energy from Stern and Levi), was facing Yuri to save her from Phil's control. Later when Dearche was casting Excalibur Trinity, Yuri told her to stop it or she will transformed back to her original cat form, but Dearche doesn't listen and she hope she can shows her true feeling to Yuri that she really wants to protect her. After successful cast Juggernaut and transformed back to cat form, Yuri finally being free from Phil's control and wonder if Dearche is getting injure or not.

Near the end of Detonation, Yuri and the three souls was go to the Eltria along with the Florian sisters. With living together with Florian family, Yuri and the other began to revive the Eltria and it's success.

As Unbreakable Dark, Yuri possesses the Examia ( Eguzamia, lit. Forever Crystal) crystal as the core supported by the Eternal Ring ( Etānaru Ringu) program. The system can only be controlled by the Tome of the Purple Sky, and it is able to regenerate the leftover of the Book of Darkness into Dark Fragments.

As an individual, Yuri herself possesses the Soul Wings as weapon, instead of wielding a Device like the Materials.

Yuri's protective clothing, probably a Barrier Jacket as she does not wield a weapon, is known as Purple Sky Attire (紫天装束 Shiten Shōzoku). During the time when Yuri is U-D, if her defensive force field is destroyed, she will be awakened and engulfed by a destructive urge, and the Attire will also turn into a reddish variation.[4]

In the movie continuity, Yuri's protective clothing has an original new design with violet instead of purple color. 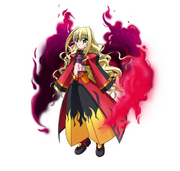 Retrieved from "https://nanoha.fandom.com/wiki/Yuri_Eberwein?oldid=33921"
Community content is available under CC-BY-SA unless otherwise noted.